Volunteering for the Forest Service

As we were finishing up our winter wanderings in Southern Arizona we got a call from the maintenance supervisor at the Forest Service ranger station where we had made arrangements to volunteer this summer.  He wanted to know if we could come up early because he had a lot of work that needed to be done in preparation for the opening of fire season.  That's how we ended up at the Blue Ridge Ranger Station, halfway between Payson and Winslow, Arizona a week earlier than our anticipated April 1 start date.

The facility serves many purposes and is open year round, however there is only a small staff during the winter months.  The majority of the facility is housing and equipment buildings for fire crews.  There are two engine companies that always stay in the local area, and two hot shot crews that can be deployed anywhere in the Western US.  Because there was so little snow this winter, the fire crews start dates were moved up, and housing needed to be de-winterized and prepared for them.  That's why we were asked to arrive early if possible.  Although I was recruited for a grounds keeper position, the experience I listed on my application convinced the maintenance supervisor that I could help with the other projects until the grass started growing.  As it has turned out, I may never see a lawnmower.

Dianna is volunteering as well.  She spends a couple mornings a week in the office, helping out whereever she can.  It gives her a chance to be with people and get the social contact she needs.  I, on the other hand, work three days a week.  I work Tuesday, Wednesday and Thursday from 8 to 4.  There are some days that we get off early and a few times that I have had to work much later.  Those are usually days that I am far away in the forest and it takes that long to get back to the ranger station.

Once my supervisor discovered that I am a jack of all trades and master of none, he immediately put me to work on all kinds of projects.  For the first month or so, mostly we worked as a team with him, another volunteer and I working together.  Getting to know where everything is and how things are done is an ongoing process.  The Mogollon Rim District of the Coconino National Forest is a large area with hundreds of miles of forest roads, several campgrounds, three fire lookouts, and a sub-station where two additional engine crews are located.  Lately my supervisor has been sending me off on my own to take care of issues, now that I know my way around and have learned what needs to be done.

I am absolutely amazed at the variety of things that the maintenance crew is responsible for.  It would take a book to cover all of it, so I'm just going to list a few of the things I have worked on thus far.
That represents a simplified overview of some of the things I have worked on.  It is far from comprehensive.  To give a sense of what a typical day looks like, here is what I did one day last week when the other volunteer took a broken washing machine to Flagstaff and my supervisor worked on several minor projects and paperwork at the ranger station.

I had called Dale when I found out where I was going that morning.  He was camping about 20 miles away and met me at the lake.  He worked as my helper, getting me tools etc. when I was in the well head so I didn't have to climb in and out.  We also had lunch together in the campground.

I don't want to give the impression that I am over worked.  There are some days the tasks can be somewhat strenuous, but we usually work together on those and take plenty of breaks.  Other days are mostly driving or working on simple things.  Just going out to remove a sign and lock can take an hour given the distances involved, and a trip to Flagstaff takes most of the day.

So far I am having fun.  I enjoy the variety of work and my supervisor is very accepting and appreciative of my suggestions and expertise.  For example, he has little experience with solar systems so I did the install at the fire lookout by myself.  I was also able to provide him with some information that changed how he planned to approach the system.

I know this is getting long so I will be brief about the rest of our doings.  Dianna made a trip to Texas to help Dayna with her new business.  She was gone a month.  Dale came to visit for a couple weeks during that time before going out into the forest to camp.  We had a good time visiting, hiking and helping the camp host at a nearby campground with the electrical system on his new RV.  Dale will be back in a couple days to spend a few more days with us.

Enough.  Just as a way to end this, here's a photo taken when were were working to clear one of the downed trees. 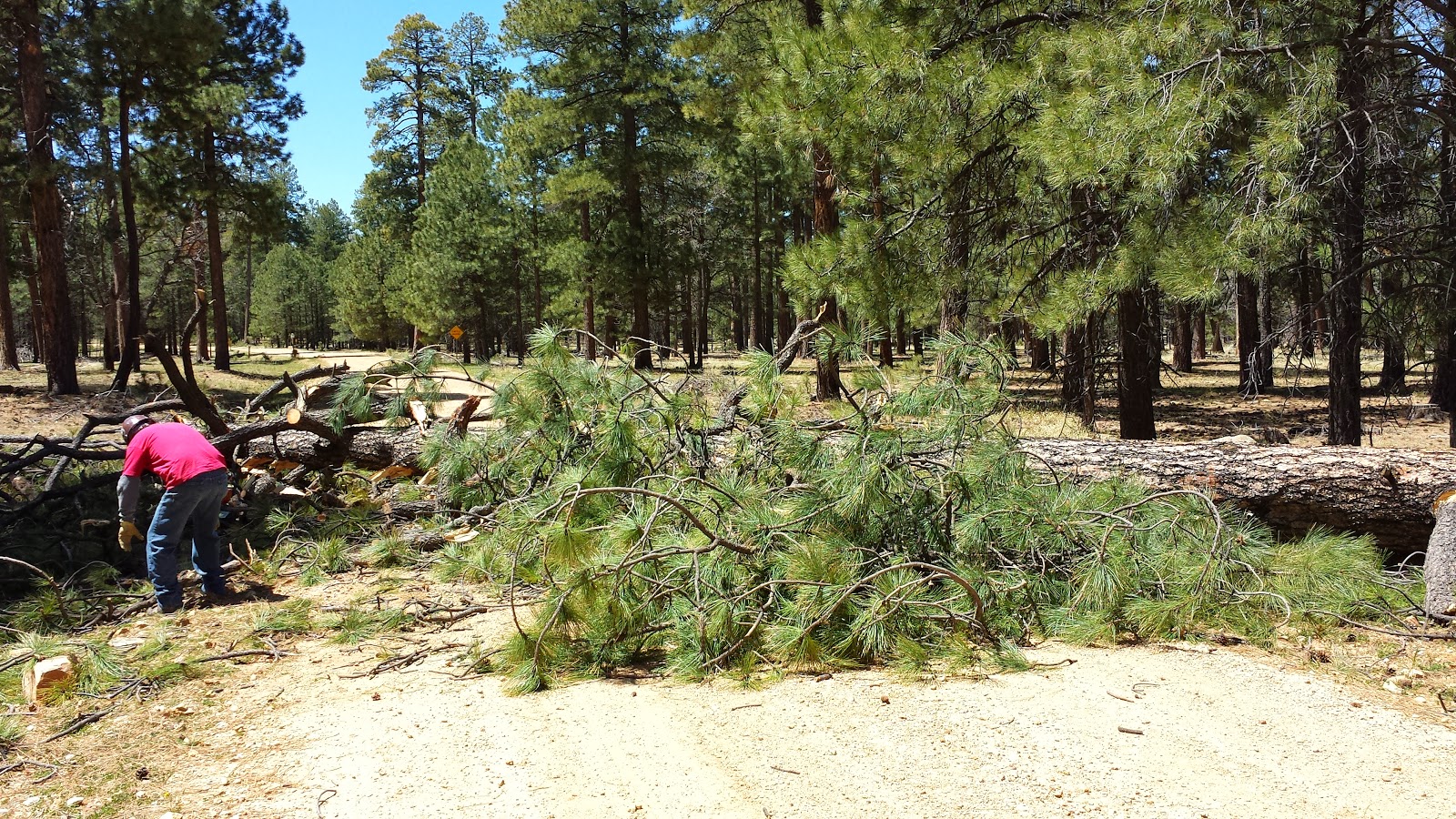 The Blog Has Moved

Many have been clamoring for a new blog post, but first some house keeping is in order.

I have moved my blog from a rented server that we (I and my brother Daryl) must maintain.  While our own server certainly offers more autonomy, I have drunk the Google Kool-ade.  I am deeply entrenched in the Google/Android world and have found that Blogger just works better and easier than having my blog on Wordpress.  It integrates everything nicely and eliminates all the maintenance and upgrading issues encountered when maintaining your own server.

Moving the blog was a multi-step process.  First I exported the blog from Wordpress in XML format.  Then I ran it through a process to convert it the XML code fro Wordpress to Blogger format.  I then imported the XML file into Blogger.  Everything came across fine except for photos.  Most of the early photos were not copied properly due to their setup on Wordpress, and all the later photos were included but Blogger still pointed to the files on the old server.  I FTP'd all the photos to my laptop and am currently in the process of uploading all the photos to Blogger so that everything is in one place.

Photos are another reason for making this change.  All photos taken with my phone are automatically uploaded to Google Plus, and including them in a blog is a simple process.

Setting up the simple URL or blog.richardlafferty.com to access the new blog took a little work.  GoDaddy is my domain registrar and the entries there point anything addressed to richardlafferty.com to the AZNB server.  I had to add entries there to redirect blog.richardlafferty.com to the Blogger server.  Behind the scenes on Google's server there is another redirect taking place.  It hides the fact that the real URL for my blog is "laffertytravelsandlife.blogspot.com".  Entering that URL directly will get you to my blog as well, but Google will sort of mask it from you.  It took some stumbling around and Daryl's help to figure this part out.

There is a pretty good chance I will eventually move my Gallery from the AZNB servers to Google as well.  That will come later.  For now, our photos are still in the same place as always.