We left Cleveland yesterday and drove to Huntsville, AL. It was only about 130 miles so we got a late start and still arrived before 2PM since we also changed back to the Central time zone. The Rocket and Space Center has an RV park on its grounds so we made reservations to stay here where we could walk to the Center. Unfortunately, the RV park is rather old and it was tough getting in and level.

Today we visited the Rocket and Space Center. This is really the home of the Saturn 5 moon rocket as well as where much of the American Space Program was developed. Werner von Braun led the facility here. The museum was very interesting and we spent over five hours there. Included in the admission were the IMAX theater, virtual reality simulators, a centrifuge ride and a simulated space launch. The space launch was nothing more than one of the rides that shoot you up in the air like those at amusement parks. Dianna (ever the kid) enjoyed it. I felt it would not be a good idea with my back, so I passed. There was a lot to see and we enjoyed it very much. We are both tired from standing so will just rest up tonight. We will continue our journey towards Denton tomorrow, but the weather forecast for the rest of the week looks ugly. We may head south toward the gulf again to try to avoid the coldest part of it. We'll see. Sure is nice not having to schedule things!
Posted by Richard at 1:21 PM 3 comments:


This is a close up of their house. The dormers really look nice.  The sun was very low in the sky so there is a lot of reflection from the side of the house. 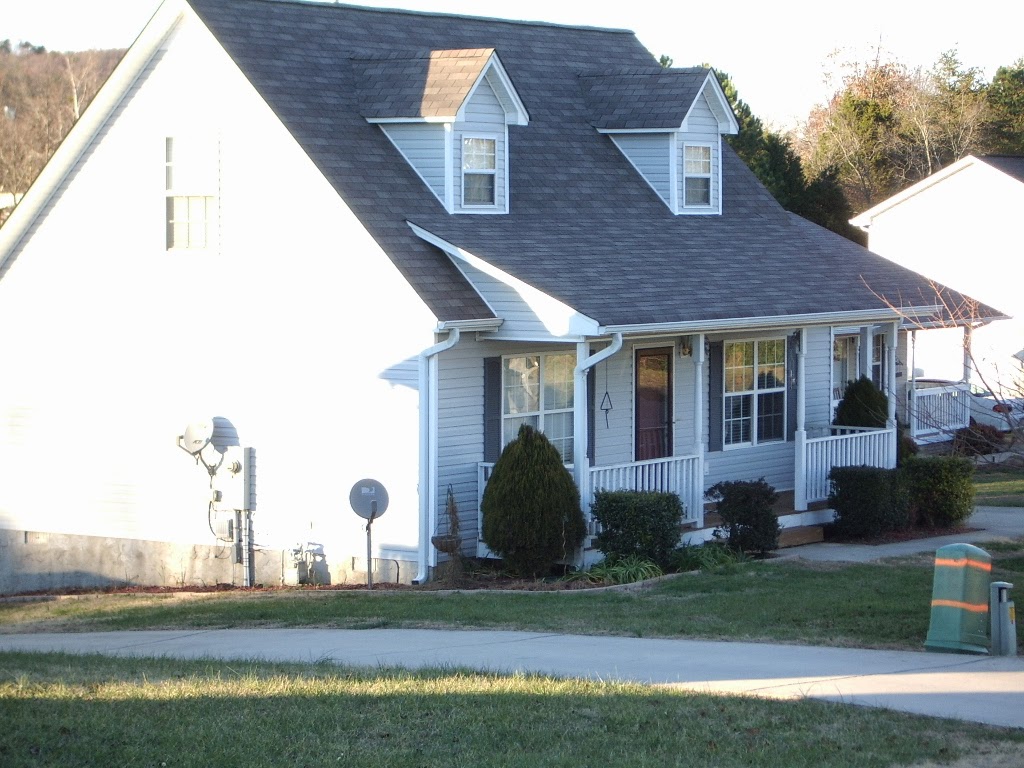 This is a photo from up the street a little ways. They are on a cul-de-sac with only two houses beyond them. It makes for very little traffic. 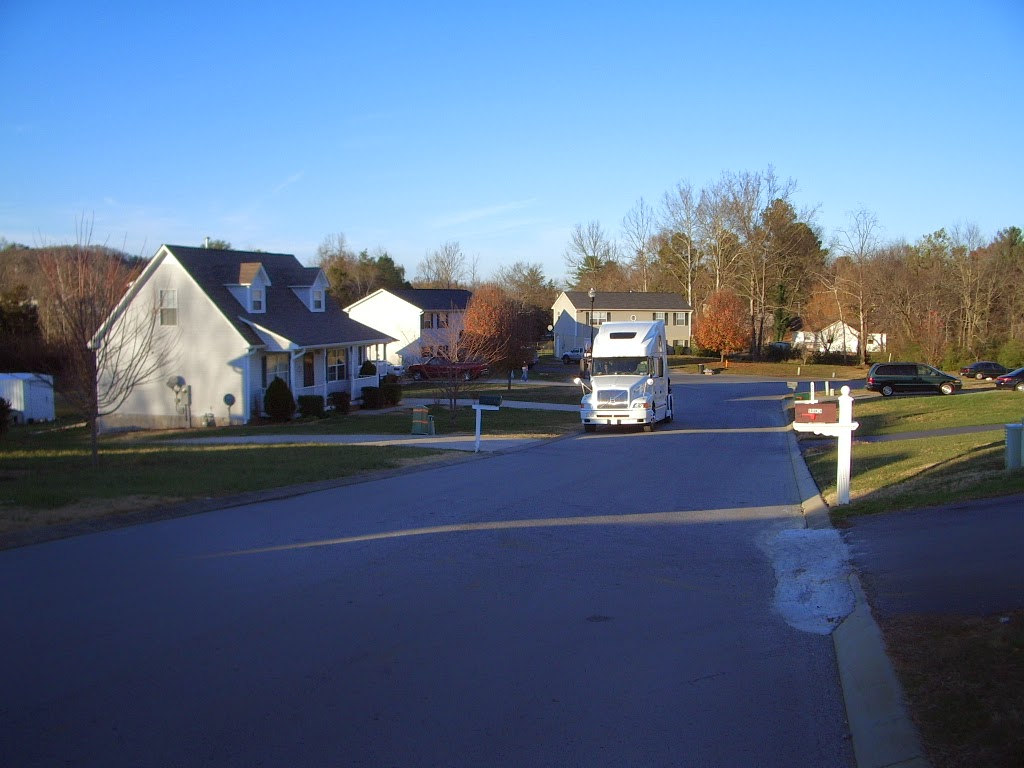 We had planned to go to Huntsville on the way to visit Darin, but decided to stop by there on our way back to Texas instead. We stayed an extra day in Summerdale and arrived here in Cleveland on Tuesday after spending Monday night in Montgomery. After all, traveling more than 200 miles a day is taxing when you are retired!

Darin and Diane have a very nice home. They are almost moved in but that is a big job. He still has to move his storage shed to the new place.

We had Thanksgiving dinner there today with just his family and us. It was very nice. Diane cooked both a turkey and ham so we all had too much to eat. Dianna made an apple pie and the world famous Lafferty chocolate pie. I don't think there is much pie left.

We plan to stay here until Monday and then head back for Texas.

We hope everyone else had a good Thanksgiving too!
Posted by Richard at 1:36 PM 2 comments:

You haven't lived until you've been hit in the head with one of Lambert's Cafe's "throwed rolls"! It's a local novelty restaurant where we had dinner last night and they literally throw the rolls to you across the room! They have traditional southern dishes and "pass arounds" dishes (sides that they walk around and offer you all through your meal) like macaroni & tomatoes, fried potatoes & onions, fried okra, black eyed peas and their famous throwed rolls served with sorghum molasses or apple butter. We have enough food left over for two more meals each so we really got our money's worth! It was great fun!!

Before dinner we did some shopping and took a drive down Hwy 59 to Gulf Shores. It is only about 20 miles southeast of us and is a beautiful gulf resort area. Unfortunately, Katrina made a mess of it.

The recovery effort is well underway and most of the houses along the beach have new siding and roofs on them already. There are some places where no house exists because there was nothing left to put new siding on.

From Gulf Shores you can turn west along the gulf and drive about 20 miles to Ft. Morgan. Ft. Morgan, on the western end of the Alabama peninsula which shelters Mobile Bay, and Ft. Gaines, on the eastern end of Dauphin Island, were Confederate strongholds which guarded the entrance to Mobile Bay. On August 5th, 1864, the Union fleet, led by Admiral David Farragut, sailed between them in the greatest naval battle of the Civil War. During the battle, Farragut issued his famous order: "Damn the torpedoes, full speed ahead." Torpedoes were what we call mines today. One of his ships was sunk by a "mine" that was set off by men in Ft. Morgan. The fort was originally built in about 1844 and was closed in the 1920's, only to be used again during WWII for a period of time. Here is a link to some information about it if you are interested. Ft. Morgan 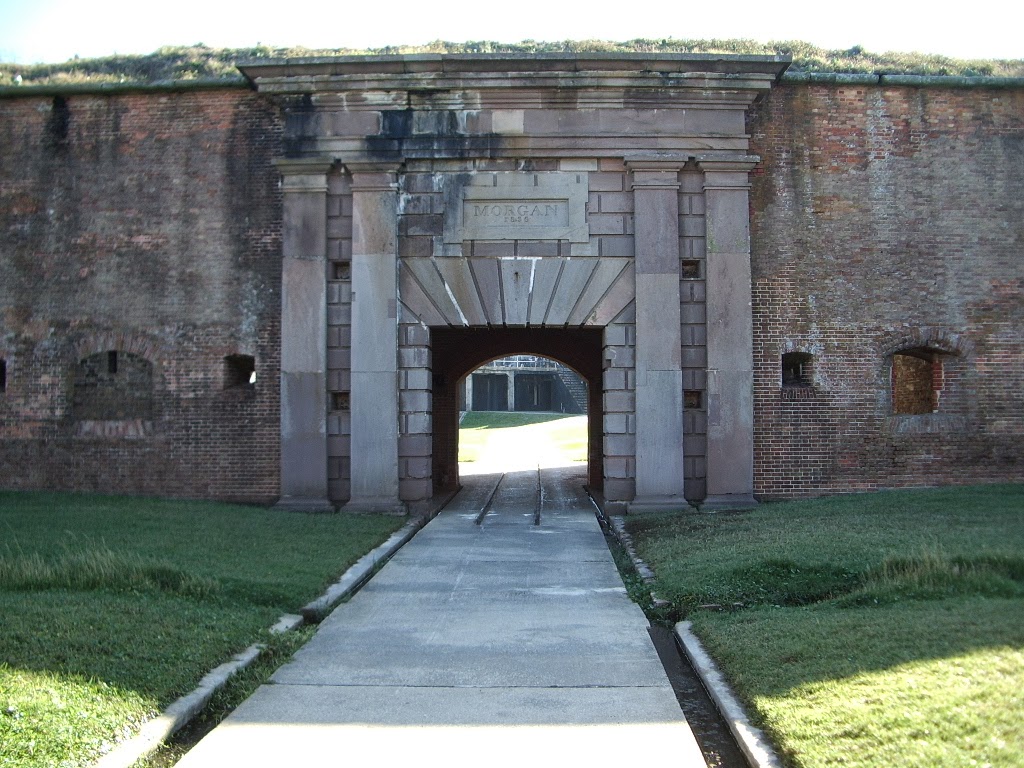 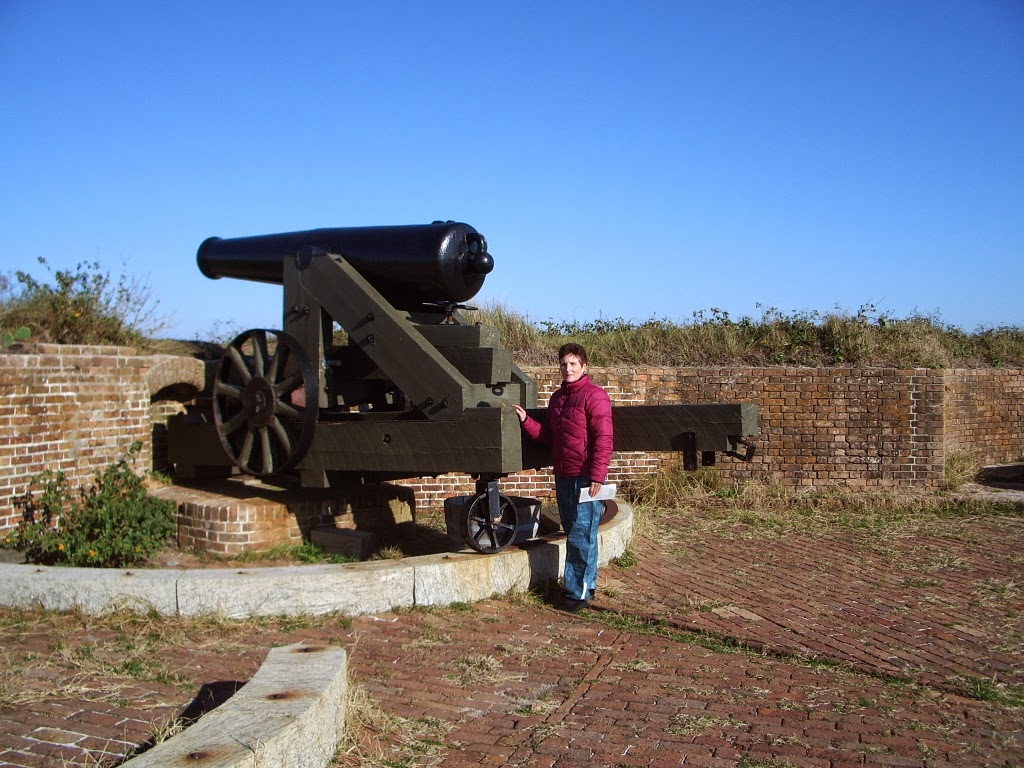 We rode back down to the fort today on the scooter since we got there too late yesterday to do any sightseeing. It was about 80 miles round trip. Since it was only in the mid 50's today we wore down jackets, long johns and gloves which helped keep us reasonably comfortable, but I don't think Dianna is up for anything much colder. We still had a good time.
Posted by Richard at 8:55 AM 2 comments:

Summerdale, AL and the USS Alabama

Sunday we drove down to Summerdale, a very rural town about 20 miles southeast of Mobile. There is an Escapees park here. Escapees is the full timer organization we belong to that provides our mail forwarding service. They also have several RV parks around the country. The price is very low and the parks are some of the nicest we ever stay in. This park is called Rainbow Plantation and has about the largest lots of any place we have ever been.

Sunday evening they had free entertainment in the club house. It was a bluegrass group who were very enjoyable. Monday we just goofed off a while and made a Wal-Mart grocery run.

Yesterday we rode the scooter to see the USS Alabama located in a park on Mobile Bay. We toured the WWII submarine Drum and spent over 3 hours touring the Alabama. That battleship is one large ship. It is the sister ship of the Massachusetts that I toured when I was in Rhode island. They also have a large number of aircraft on display, including an SR71 Blackbird. However, the aircraft were not in the museum. They were all sitting outside and are all damaged to some degree or another. 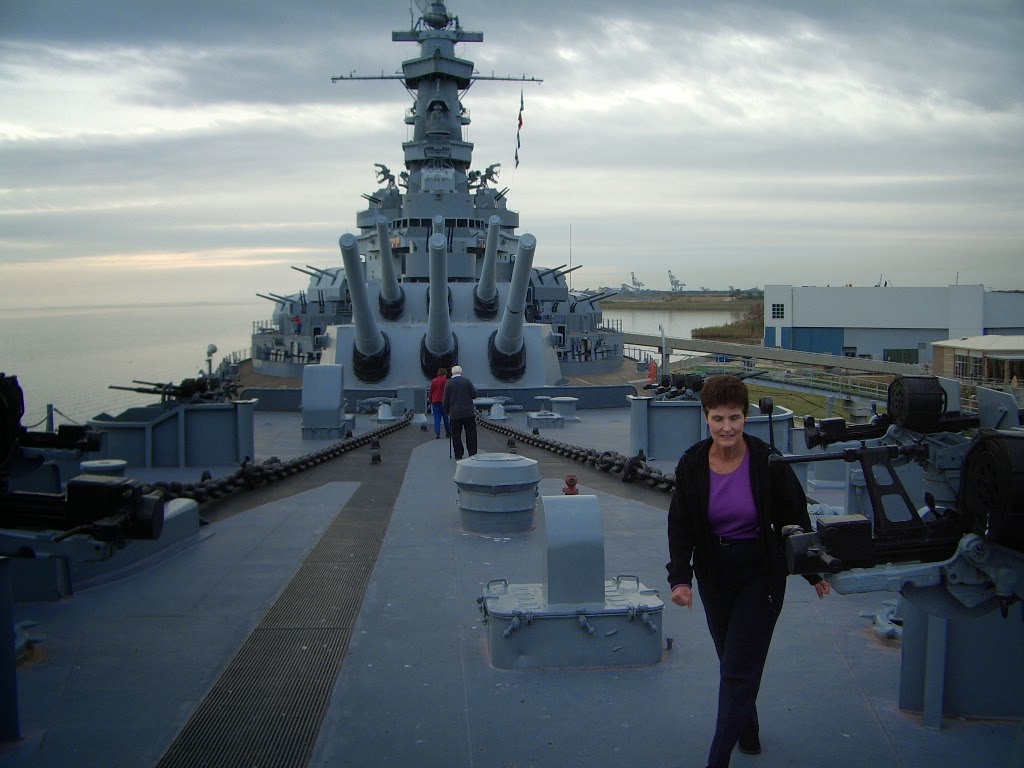 When Katrina hit it caused major damage to the whole museum. The building where the aircraft were displayed was torn open and the planes were blown around inside. In addition, when the storm surge came up Mobile Bay it hit the Alabama and lifted it out of the 30 feet of mud it was sitting in. It listed over several degrees and caused the boarding ramps to be destroyed. I understand it took several months to get the mud dredged out and the ship righted again. I had no idea that the damage was that serious this far east of New Orleans. That was one nasty hurricane!

Today we have not left the RV. A major storm arrived in the southeast last night with wind and rain. You may have heard reports on the TV. No real problem here except for a lot of rain and some gusty wind. It is supposed to be out of here tonight and we will continue our exploration of the area tomorrow.
Posted by Richard at 6:34 AM 1 comment:

Gorgeous weather yesterday as we scooted the 16 mile tour of the Vicksburg National Military Park. For the most part the first half of the tour follows the Union lines during the 47 day siege and the latter half the Confederate placements. It's very interesting learning of Civil War battles from the South's point of view!

Every state that had soldiers there has a major memorial - very beautiful ones - and many smaller ones all over the park representing, I guess, places they were defending or attacking from. We walked in the trenches, tunnels and fields the soldiers did, thinking of all the blood spilled and lives lost in that crucial time in our country's history.

They raised a gunboat in the 1960s, built a "ghosted" framework and it is now on display. It sank in only 12 minutes from a mine with no loss of life. Amazing relics on display. (Did you know rhubarb's most common use is medicinal? We all thought it was better in pies!)

We drove around the old part of town enjoying the many antebellum homes still around. We were going to visit one today but they stopped tours until next Feb.

We did visit the Courthouse Museum today. Lots of stories of people from the area and many artifacts. Most were from the Civil War era but some up through WWII.

The North sure mistreated the southerners, black and white alike, after the war. They both did a miserable job taking care of prisoners. Over 26,000 southerners and more than 22,000 northerners died in prison camps. Not a very admirable time.

The temperature dropped by about 30 degrees today so we really had to bundle up to ride the scooter. Didn't do much driving around as a result so we were glad we enjoyed our day out yesterday. We leave in the morning for Mobile.

Side notes: Dayna won't need further surgery any time soon. She'll just have to live with the pain and fortunately she has a high threshold like her dad. Unlike her son who screamed and hollered at the ER Wed. as he had to have four stitches above his eye due to a skateboard accident. Continued to holler after it was numbed & he couldn't feel a thing!!
Posted by Richard at 8:43 AM 3 comments:

On the road again

We leave Denton tomorrow for points east. The overall destination is to visit Darin and Diane in their new home in Cleveland, TN. Their new home is only about 3 miles from the trailer they have rented for the past few years. They closed escrow yesterday and are in the process of moving in today.

Our planned route to TN is to spend a day in Vicksburg, MS to visit the National Historic Park there, then to the Mobile, AL - Pensacola, FL area to visit some museums in the area. Then up to Huntsville, AL to visit the NASA facility there where the Saturn 5 Booster was built, along with many other rockets.

It will probably be a couple weeks before we get to TN but we will be there in time to spend Thanksgiving with Darin and family. Then slowly back to Denton to spend Christmas with Dayna's family.

We don't know how much internet access we will have for the next couple weeks, but we will try to keep you all up to date on our travels as much possible.
Posted by Richard at 2:12 PM 1 comment: