We are settling in to boondocking in the desert. The weather has been really nice. The highs are in the low 70's and the overnight lows are about 40. The wind has blown a little but not too bad. In the mornings before any wind I have been working and walking outside in a sweatshirt when the temperature is still only in the low 50's. The sun is really warm and the dry climate feels so good.

This is what it looks like out here. There is a lot of nothing. That is our truck and trailer in the center of the photo. Opinions vary about whether or not the starkness has a beauty of its own. 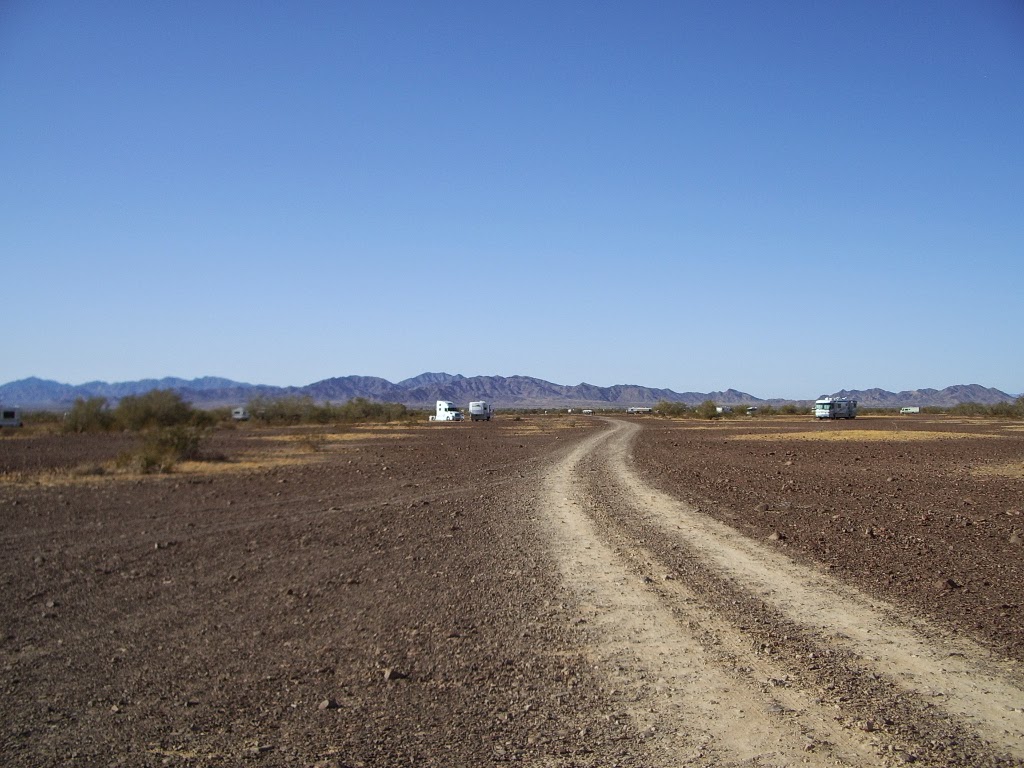 We have been keeping busy with daily hikes and also have gone into town each day to wander through a different shopping area. Lots of the booths have the same stuff, but there is also some variety. It really feels like a big state fair or a huge swap meet. We had some of the best kettle corn we have ever eaten at one of the stands.

I purchased a tilt mount for one of the solar panels yesterday and installed it this morning. With just the one panel tilted it increased the wattage by about 20%. Previously the highest wattage output was 423. After tilting just one panel we achieved 506. This afternoon we went into town and purchased tilt mounts for the remaining 4 panels. It will take a couple days to get them all installed, but I am greatly encouraged. Today we ran the generator for only about half an hour during breakfast and by late afternoon the batteries were fully charged. I am confident that getting the rest of the panels tilted will provide us with enough charging capacity that we will rarely need to run the generator at all. About the only time it will be needed is when we run the convection oven for an extended period of time. Since we do not have a gas oven we have no other way to bake or roast except for the gas bar-b-que which has its limitations too.

Dianna is still not sure about this whole way of living. Even though the rig is set up for self contained living, it does have some limitations and things you need to remember. For example, the big overhead florescent light does not work unless we are plugged in or running the generator. She is not happy about the placement of the 12 volt florescent lights so I may have to add some to make her happy. She is also used to playing internet games on the computer for several hours every day and we don't have the electric power for her to do that yet. After the panels all get tilted we may, but I think she is going through Pogo withdrawal.

We may have to go get water tomorrow. The trailer holds 70 gallons and I have a water bladder that holds 45 gallons that I can take on the back of the truck to a water source. We can probably go for at least a couple weeks without dumping our holding tanks. I have been toying with the idea of finding a large tank I could mount on the truck that would be used to haul wastewater to a dump site as well. If I could find something like that we would not have to move the trailer at all. Only time will tell how it all works out.
Posted by Richard at 2:00 PM

Email ThisBlogThis!Share to TwitterShare to FacebookShare to Pinterest
Labels: Quartzsite 2007