London Bridge Has Not Fallen Down

We are sure about that because we saw it today. Well, maybe it was taken down, moved, and reassembled, but it is still doing its job in the Arizona desert. Most people are aware of the fact that the bridge was moved from London to Lake Havasu almost 40 years ago. We first visited the area sometime in the mid to late 1970's. At the time the McCullough Company was promoting a land development on the eastern shore of Lake Havasu and thought the bridge would draw people to the area. It did, and now the city of Lake Havasu is a city. I am guessing it is the largest city on the Colorado River except for Yuma.

The weather was forecast to be really nice today so we planned a scooter trip. We left about 11 AM and stopped first in Parker, AZ, about 35 miles from Quartzsite, for a short break. Then on to Lake Havasu City, about another 40 miles north along the river and lake. Lake Havasu is formed by Parker Dam which is located about 18 miles north of the city of Parker.

Our first stop was at a Red Robin for lunch, and then we wandered around the shops at the foot of the bridge. We both remember it being new and interesting when we were last here about 25 years ago, but things have fallen into a state of decline. Many of the shops are closed and they are apparently planning some redevelopment of the whole area. It needs it.

Interestingly, there is a candle shop there where we bought a Christmas candle about 30 years ago. The candle shop is still there and the same people own it. It is probably the biggest and most successful shop in the area.

Here is a picture of Dianna standing below the bridge. 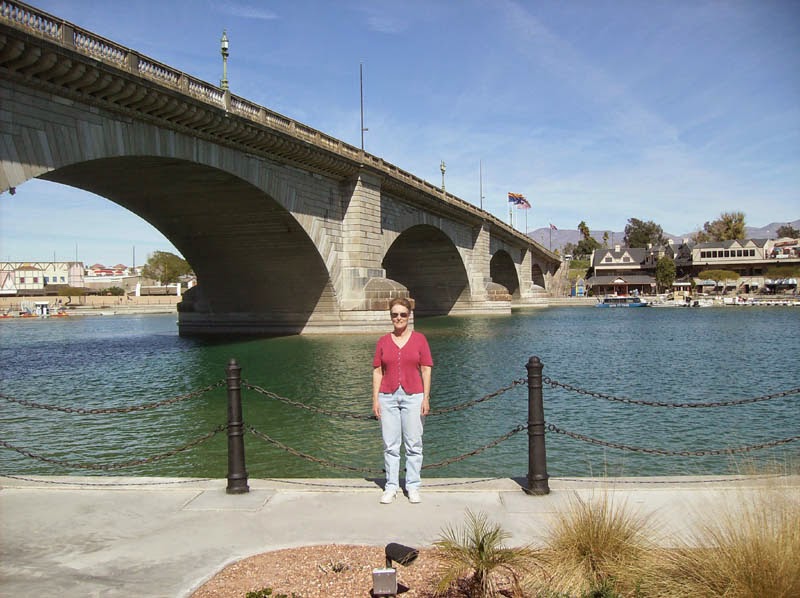 We then rode around the island where the bridge goes. It is a large island and has many RV campgrounds, golf courses, marinas and condos, with more being built all the time. We then made a stop at the local WalMart before heading south again. We turned off at the spur road to Parker Dam and crossed over to the California side for the 19 mile ride down to Parker again. The road is much older and follows the river so it is a much more enjoyable ride on the scooter. Crossing the dam is only permitted for passenger cars an motorcycles. It is obvious 9/11 has had a huge impact. There are big barriers you have to weave through before arriving at the bridge itself, and there are guards standing around. They don't even allow people to walk across it anymore, even though there are sidewalks.


In Parker we stopped at McDonalds for hot fudge sundaes and then we rode home, arriving back at our trailer about 5:30. The total trip was about 160 miles and both of us are a little saddle sore, but it was a fun ride. The temperature was about 80 degrees this afternoon and there was no wind to speak of. Great scooter riding weather.