Yesterday we visited the museum at the Yuma Proving Grounds. It is located on the base about three miles from us. We learned a lot about the history and current mission of YPG and both of us found it interesting.

YPG began in early 1942 when George Patton was tasked with setting up a desert training center. They needed a place to train soldiers to fight in North Africa and other desert locations. There were huge chunks of desert land appropriated for the purpose, most of which was already owned by the government, and several camps were set up. The camp nearest to here was Camp Laguna which is just a couple miles from the current main base.

There were lots of pictures of men during their training. It was one of the most harsh and primitive places used for training during the entire war. Some of the men who trained here have donated photos and letters they wrote while here. Most do not have pleasant memories of the place.

Even during the war the area started being used for testing military equipment. Strangely, one of the many things developed and tested here during the war was river fording equipment. We saw pictures of the temporary bridges built on rubber rafts that were used to cross rivers in Europe during the war. The ability to control the amount of water in the river by using Imperial Dam gave them a tool to test different flow rates and develop a system that worked. During the testing several tanks were dropped to the bottom of the Colorado.

Starting after the war in 1950 the current Yuma Proving Grounds developed. They have tested every piece of equipment used by the US Army here and in the other two test areas that are managed from here. This is the desert test facility but they also manage the polar test facility located in Alaska, and the tropical test centers located in Panama, Honduras and other locations.

They told us that there are currently about 1,000 different items being tested, including devices used in Iraq. They actually constructed an Iraqi city to look like Bagdad where they could find ways to locate and destroy IED's. That program is still under way and even included testing to see if bees could be used to find the devices since they are drawn to some of the chemicals found in explosives.

When driving by or visiting the housing section of the base where we were, the impression you have is that not much is going on here. In fact there are about 3,000 employees working here every day, of which only about 100 are military. The rest are civilian contractors. It is a very busy place.

One additional thing we learned is that this is the training facility for HALO (High Altitude Low Opening) teams. About 1,000 paratroopers go through the school here every year. They learn to parachute from very high altitudes and free fall to an area that may be miles from where they jump before they open their parachutes at low altitude. It it a technique used mostly by special forces. The Golden Knights, the Army parachute demonstration team, also trains here from the middle of January to the middle of March each year. We have seen them at air shows several times.

A few years ago I remember hearing about George Bush senior sky diving on his 72nd birthday. The first time he had parachuted was bailing out of his airplane when he was shot down during WW II. That birthday parachute jump was done here at YPG, the only time a president or past president has ever visited the facility. By the way, he has since made additional jumps, the most recent was just last year at the age of 83. He parachuted in to the reopening of his presidential library in College Station, Texas.

Earlier in the week I toured an outdoor exhibit where some of the vehicles tested here were displayed. One was the 175 MM Self Propelled Gun I worked on in VietNam. In fact, I fired one once while at Fire Base Bastogne into the Ah Shaw Valley where some serious fighting was going on near Hamburger Hill. 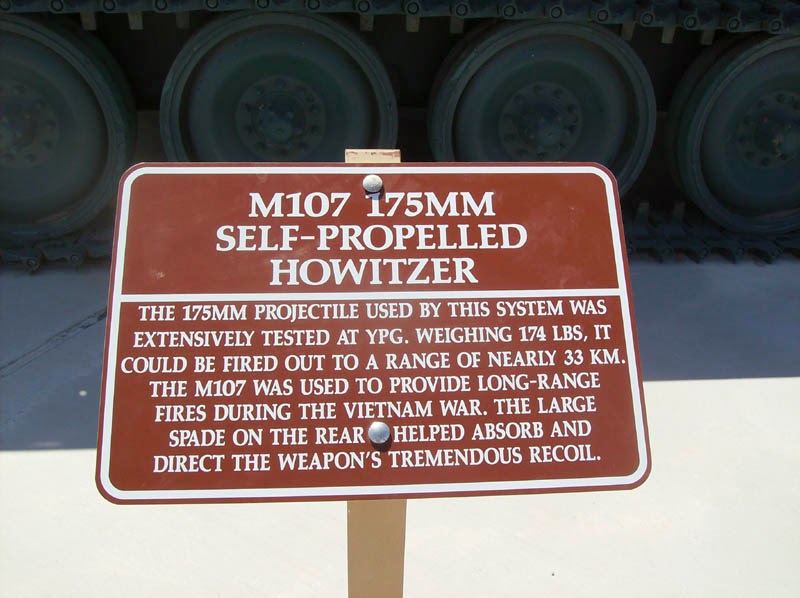 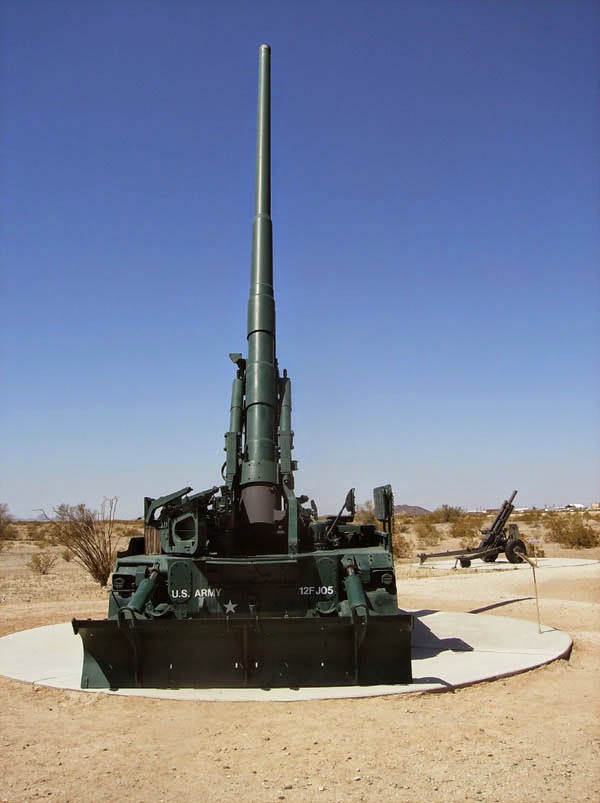 We enjoyed ourselves and found all this interesting. If you are interested in learning more you can visit their web site. Yuma Proving Grounds

We will only be here a few more days and then we are off to San Onofre.
Posted by Richard at 2:50 AM