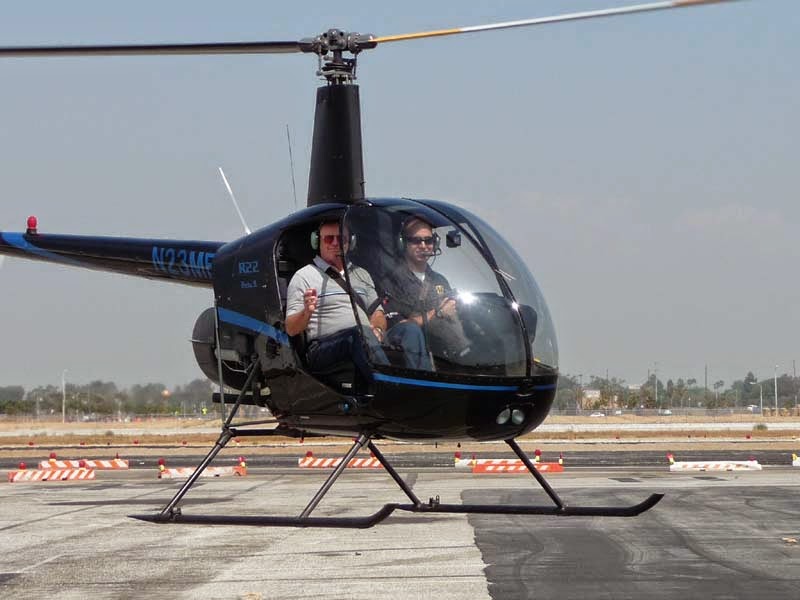 The Jennings family gave me a very nice Fathers Day present.  They gave me a gift certificate to Xperience Days where you can select your own experience from a number of things around the country.  One of the choices was the opportunity to take a helicopter flying lesson, something I have always wanted to do.

We arrived at Long Beach Airport about 11 and spent the first half hour in ground school.  Dianna was able to sit in on that part.  The pilot explained each of the controls and some safety procedures.  Then we walked out to the flight line, pre-flighted the Robinson R-22 and climbed in.

The cockpit is similar to an airplane, but there are some differences.  The  big differences are in the controls.  It takes both feet on the pedals, the right hand on the cyclic and the left hand on the collective which also has the throttle.  Too bad if you need to scratch your nose!

The pilot took off and we climbed up to 500 feet and headed west toward the L.A. River.  He shortly  told me to take over the pedals.  They work differently on a helicopter than on an airplane.  All they control is where the helicopter is pointing, not the direction of flight.  He banked left over the river and turned the collective over to me and told me to climb up to 700 feet.  Once I leveled off there, he also turned over the cyclic to me and I flew down the river, then made a long slow U turn over Long Beach Harbor and back towards the airport.

As you can see in the picture, there are no doors and my right arm was sticking out in the wind.  It is a very small craft.  All this results in tremendous views.  You can look straight down by just putting your head out the door a little.  It was neat seeing the Queen Mary and downtown Long Beach, Signal Hill where I once worked and all the other sights of a place where we used to live.

He took the controls again as we descended and he put us in a hover over a pad in a special part of the airport.  There he demonstrated hovering and gave me several opportunities to control it.  The first couple times he handled the cyclic, but he was impressed enough in my ability to let me do a couple hovers where I was in complete control.  It is not easy!  I was able to maintain pretty good position for about a minute and a half, but then it kind of got away from me and he took control again.  I think I could have gotten it with a few more tries, but the wind was blowing pretty good and that was not helping.

Our half hour was up so we hover taxied back to the flight line and landed.  He filled out my pilot's log book with half an hour of dual helicopter instruction.  Whoo hoo!

Thanks again Dayna, Chris, Deidra and Dom.
Posted by Richard at 9:45 AM