We woke to rain on the roof, but it cleared off later and we even got some sunshine. We made a run into town to get propane, mail a letter and do some grocery shopping. On the way back we stopped and had a stone chip in our windshield repaired. It is still obvious, but since it is on the passenger side that will not be a big problem. And, now it should not get any larger. We took a rock in the windshield about three days ago just outside of Soldotna. Everyone worries about rocks from big trucks on gravel roads but this rock hit us on a major, paved highway. It was kicked up from a pickup truck we met who was pulling a small trailer. It could have happened anywhere.

One of the things I have enjoyed most during this trip has been the opportunity to watch our countries symbol, the bald eagle, living and flying in his natural habitat. I had never seen one anywhere but in a zoo before. They are the most magnificent bird there is. Not only are they beautiful to look at, but the way they hold they hold their wings while flying and soaring gives them such a powerful, regal look. We saw eagles during both of our cruises, but the last place I expected to see them was here on Homer Spit. Wrong. There are at least four of them who visit the area frequently.

We were eating dinner when I noticed a commotion among the sea gulls. They are everywhere and spend their time scavenging the fish cleaning remains that fishermen throw into the water all the time. When we first saw fishermen cleaning their fish at the shoreline and throwing the guts into the water we were shocked, but we soon saw that the gulls clean it up quickly so no harm is done. A fisherman had cleaned a fish at the waters edge just down from our trailer. At first I thought the gulls were just fighting over the remains but then realized they were all just excitedly flying around, not going near it. Then I saw why. From right over our trailer a beautiful black form glided down toward the fish. He made a low pass, then climbed back up and circled around a couple times. All the while the gulls were flapping around. None of them dared to go near it. Finally, the eagle made a low pass, extended his talons, and snatched his prize from the water less than 100 feet from where we were standing. The photo I captured was about a half second late, but you can clearly see where he had disturbed the water. It was quite a show and one we will not grow tired of watching while we are here. 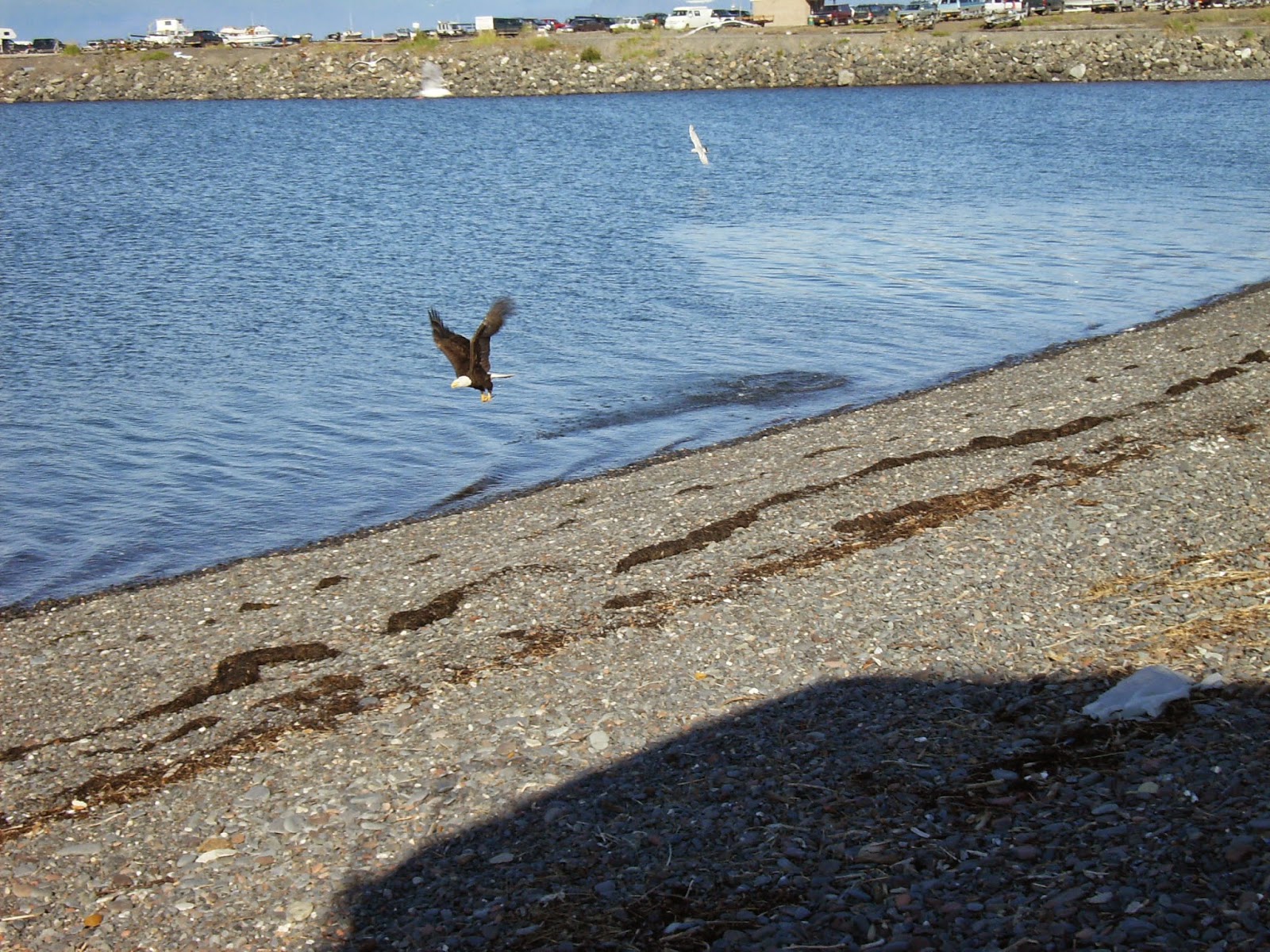 This evening we watched “Pearl Harbor” on DVD. It was a three hour movie and I think Dianna cried through at least 2 hours of it. It was a romantic love story built around the Pearl Harbor attack and the Doolittle Raid.
Posted by Richard at 4:33 AM