We took a trip to Homer today. It is only about 80 miles from where we are staying and is the end of the road. They call it “Lands End”. The road runs from here in Sterling over toward the coast and follows it down to Homer. The scenery along the coast was great.

Our first stop was at the little town of Ninilchik where we visited another Russian Orthodox Church. Like the one we visited in Kenai, this one is still very active. The little settlement of Ninilchik is still mostly of that faith and the cemetery is very active as well. We spent some time walking through the cemetery and reading gravestones. That may not be entertaining to most people, but we find it interesting. 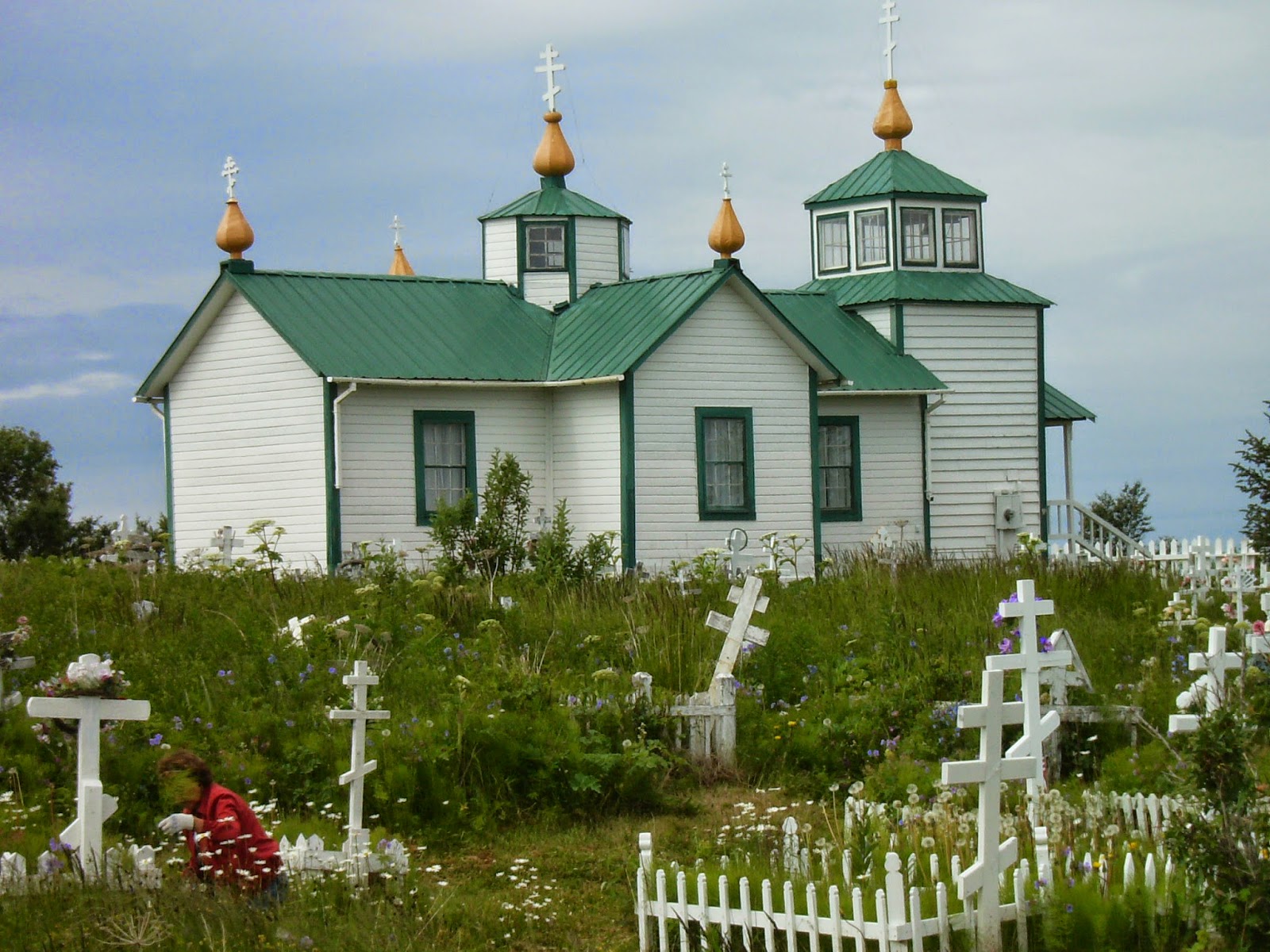 From the cemetery on the bluffs we were able to look down to the beach and saw an amazing sight. Hundreds of clammers were hard at work digging razorback clams. 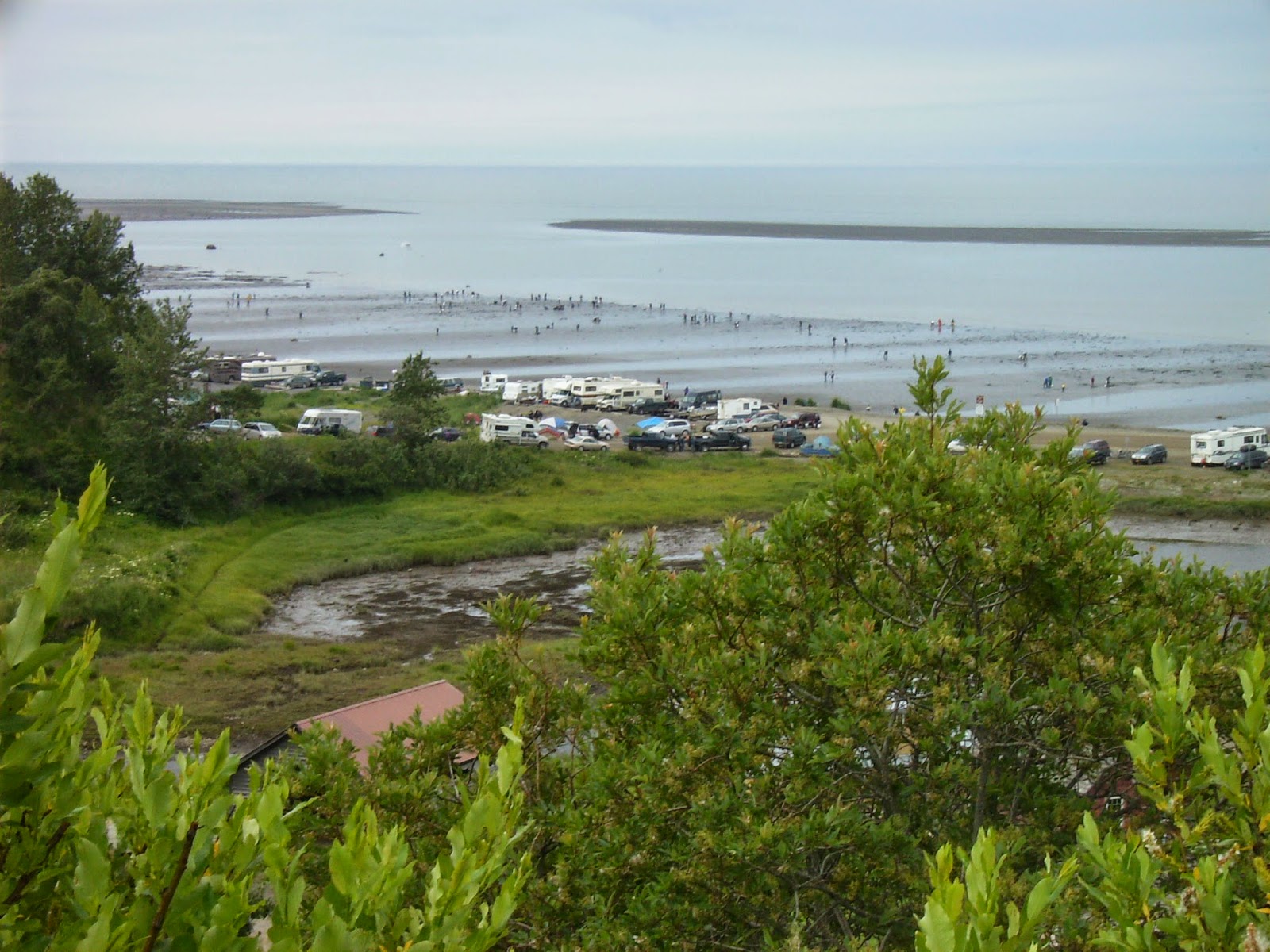 We drove down and checked it out. If we liked clams we might have given it a try, but you really need special equipment we didn’t have. We could have rented some, but the tide was coming in so clamming was ending anyway. Besides, neither of us like clams prepared any way other than in chowder.

We then continued our drive toward Homer, stopping at the scenic overlook located along the highway just before you descend into town. The view is one of the most beautiful in Alaska. The glacier covered mountains across Kachemak Bay, the green hills, the dark blue-green water and the famous Homer Spit sticking out into the sea combine in a most striking way. 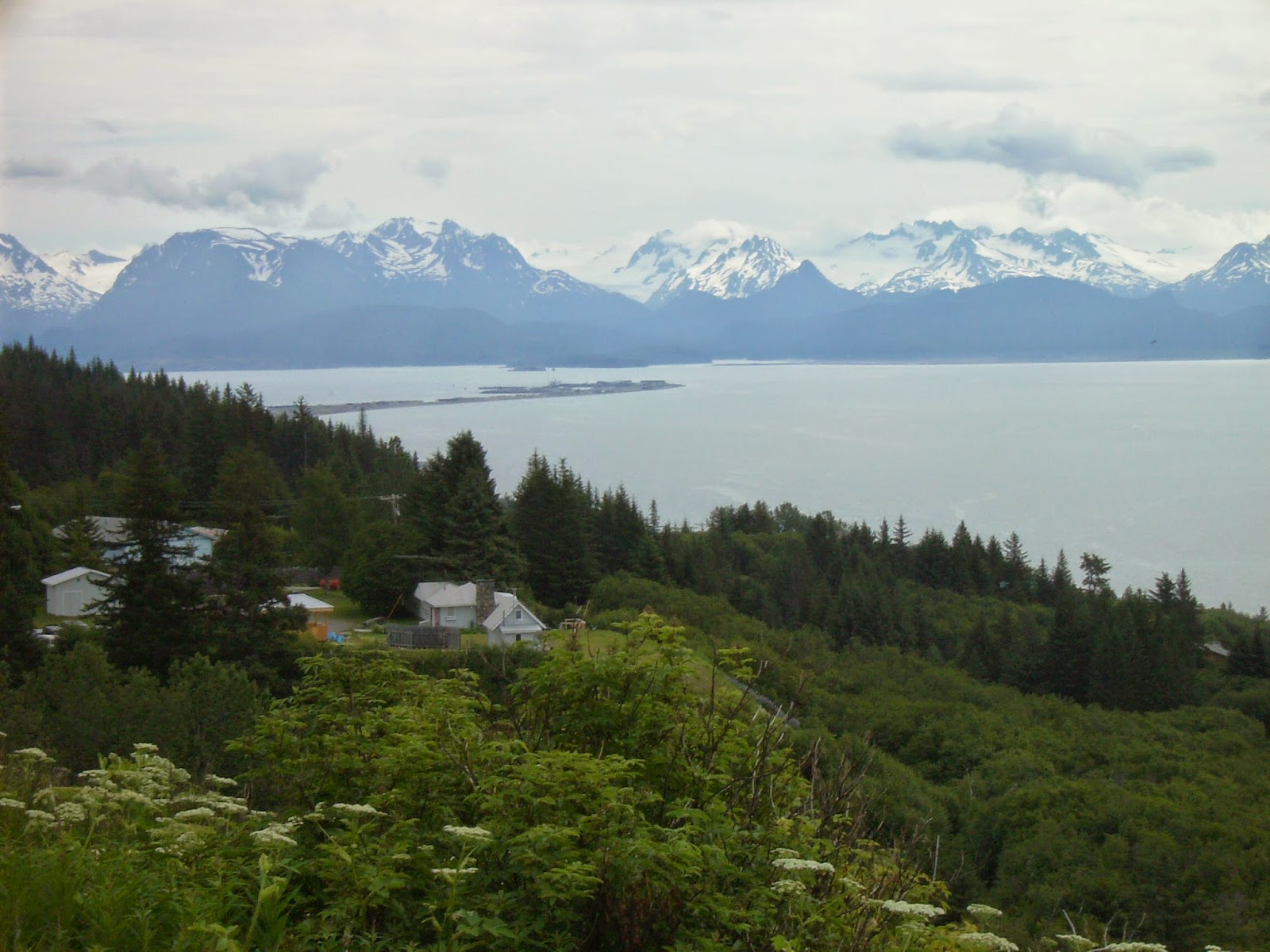 There were some beautiful flower beds at the scenic overlook and we just had to take a picture of one of the blossoms that caught our eye. We have no idea what kind of flower it is, but it sure is pretty. 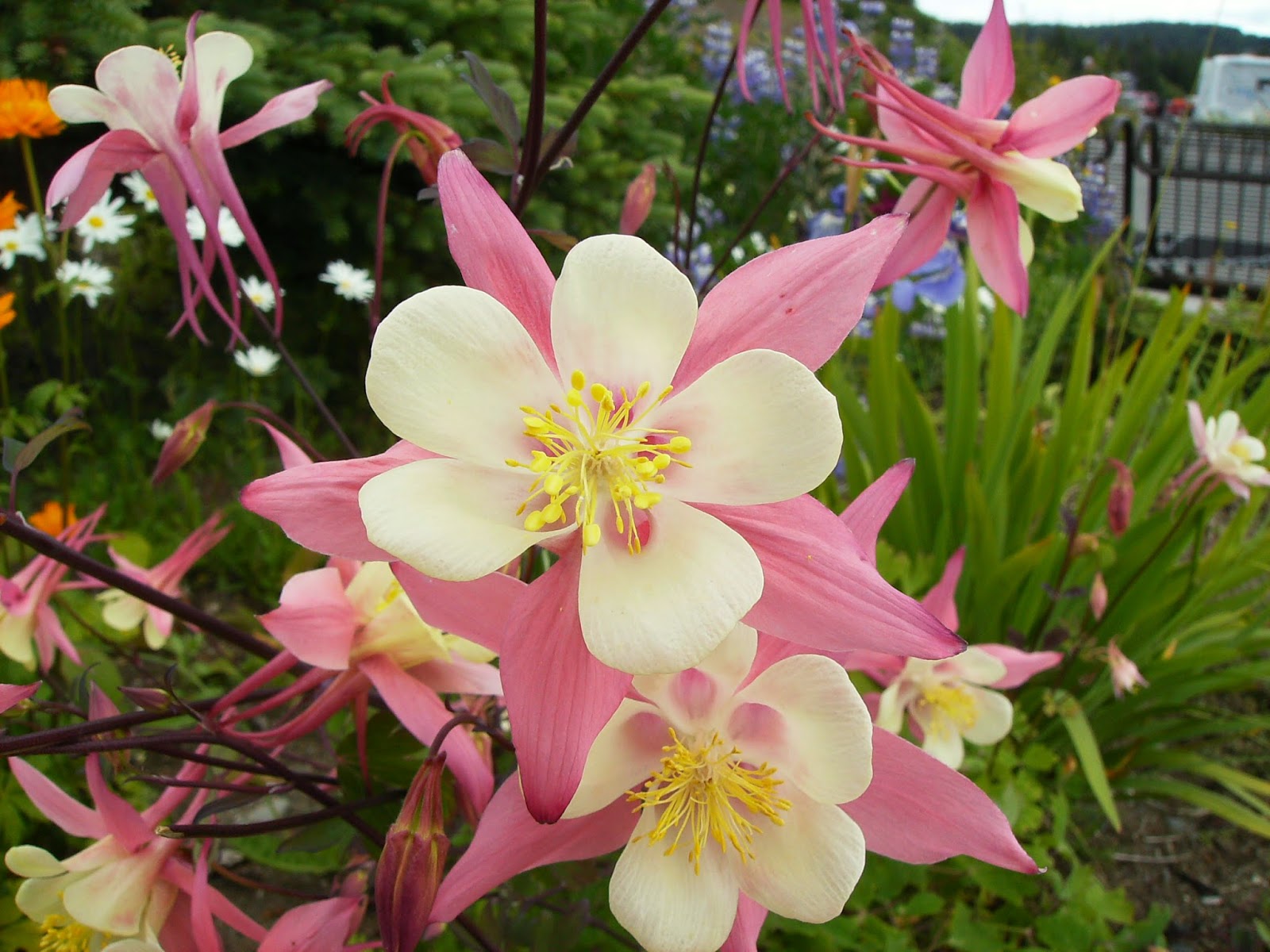 Our first stop in town was an Arby’s for lunch. I know it’s not Alaskan, but if we ate lunch at a local restaurant for $50 or so, we would not be able to afford to stay in Alaska very long. We are saving our eating out for special occasions.

Then we drove out on the Homer spit. It is a five mile long finger of land, never more than 100 yards wide, made of sand and gravel, extending out into the bay. It has developed into a huge fishing mecca for people around the world. There are hundreds of charter fishing boats and thousands of fishermen. The fish of choice is halibut, for which the area is famous. There are a few gift shops scattered among the fishing charter offices, but even they usually book fishing trips as well.

There are thousands of cars and RV’s parked along the spit. Toward the end there are mostly parking lots where people park while out on a fishing trip. A little closer in are the RV parks with hookups (which charge up to $70 per day) and some state campgrounds with no services that charge a much smaller daily fee. Some people come just to soak in the scenery, but I’m surprised the spit doesn’t sink under the weight of all the vehicles! We understand that the spit sank four to six feet after the 1964 earthquake. Maybe all the cars will push it down farther. The photos below are taken from one spot and face left and right. 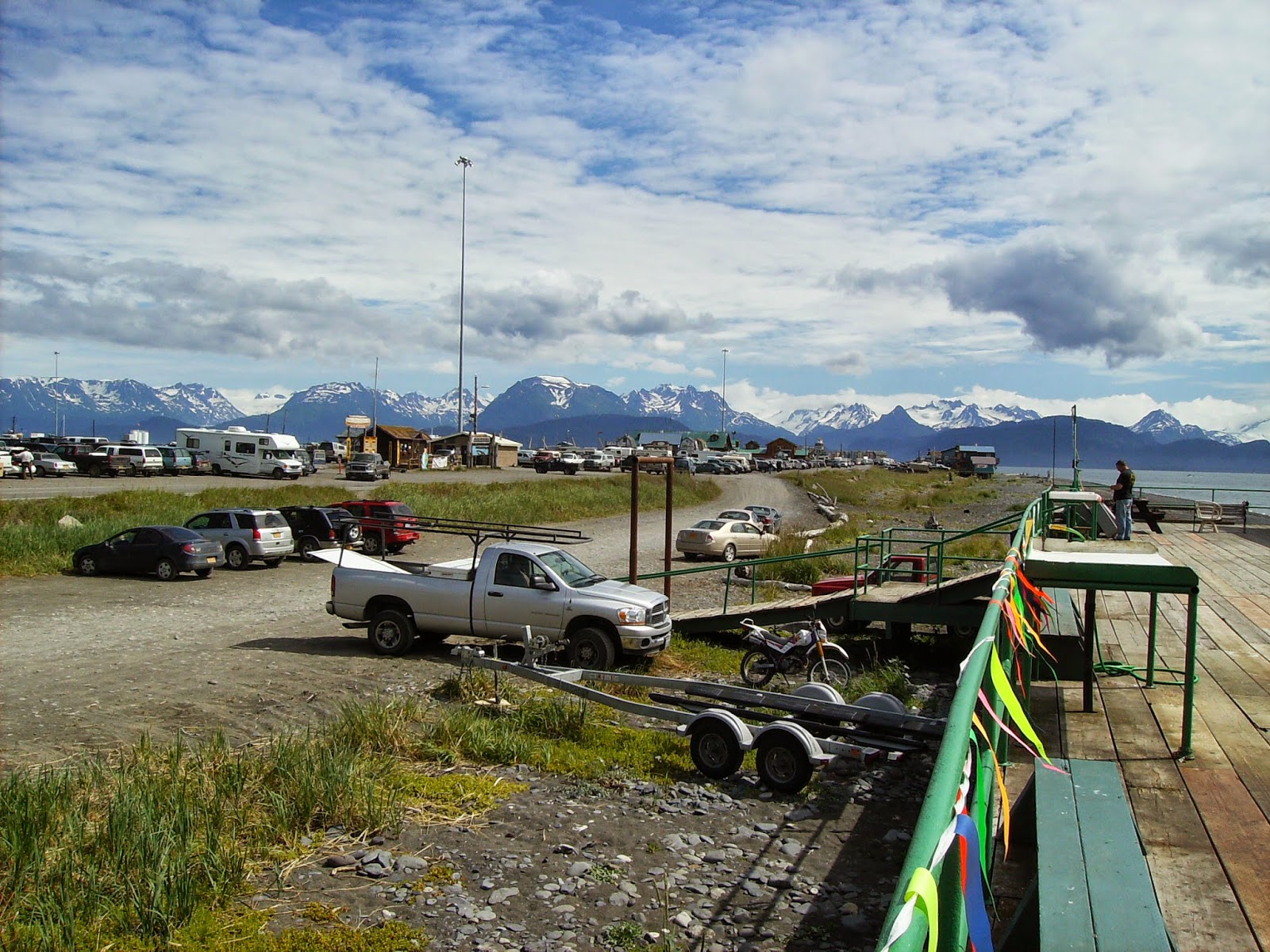 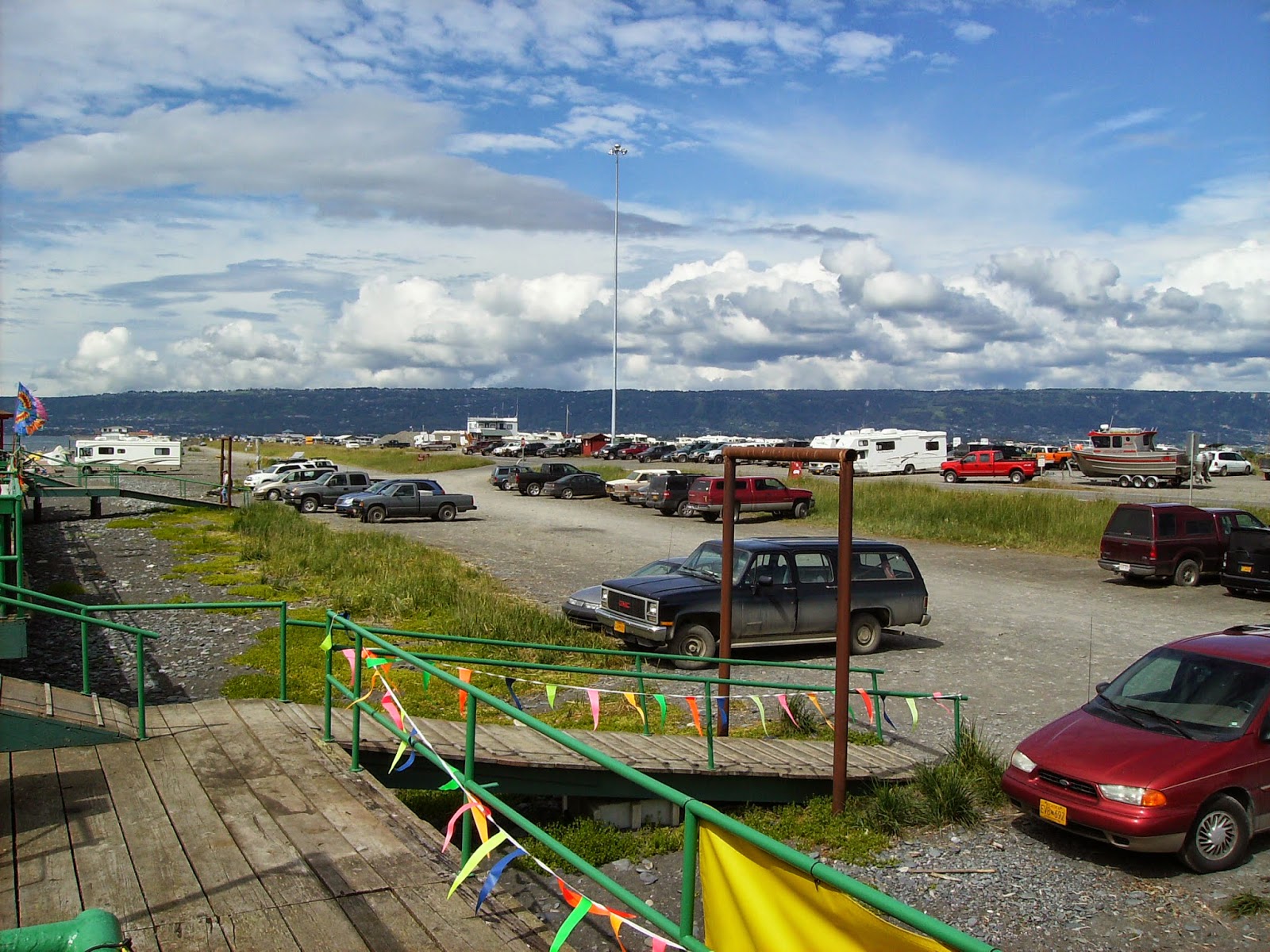 We wandered around town for a while and soaked in a sense of the place, but left after an hour or so. We have come to the inescapable conclusion that the Kenai Peninsula offers some history and scenery, but if you don’t fish, you won’t find a lot to do. Every stream and river is fished for salmon, the lakes for trout, and deep sea charters run from every port. Clamming along the beaches fits in there somewhere. Some people come just to camp and view wildlife, but the vast majority of the people come here to fish.

We returned home and had green chile chicken enchiladas for dinner.
Posted by Richard at 5:29 AM