Trip to Phoenix and Dayna Graduates from College

Three Thirty AM comes very early, but we all got up and quickly got ready. The streets of Anchorage were empty as we drove to the off-airport parking lot. The shuttle bus took us to our terminal and we checked our luggage and made our way through the pain and hassle of security. Our Alaska Airlines flight left on time and the kids were impressed with First Class seats. They were not however, impressed with First Class food. On the flight down to Seattle we were served a quiche that was not bad, but the “lunch” they served on the flight from Seattle to Phoenix consisted of some brie cheese, some cheddar cheese, four crackers and a small bunch of grapes. Flying First Class sure isn’t what it used to be!

The scenery was spectacular on the way down the coast of Alaska and British Columbia and we spent a lot time looking out the window and watching our individual DVD players the airline provided. The leg from Seattle was pretty at first but soon became brown and desert (the Grand Canyon was spectacular though!). When we took off in Anchorage the temperature was 55 but when we landed in Phoenix it was 117. Ouch! We picked up our rental car and drove to Donna’s where we all spent the night. Donna fed us all well while we were there and we all appreciated her hospitality.

Friday, Dayna and her best friend, Crystal, arrived from New Mexico so Dianna and I moved to Daryl and Gisele’s house for the rest of our stay. It was fun seeing everyone, including Devon and Derek, but we all probably spent more time fussing with Apollo than anything else. He has grown tremendously since we last saw him, and is a beautiful Husky. Friday afternoon we visited Mom and the kids finished up the hooked rugs they had been making for their mommy.

Saturday morning Chris arrived from Dallas and that afternoon we all (including Donna) found our way to the University of Phoenix Stadium for Dayna’s college graduation. It was a very nice ceremony and we are so proud of her for what she has accomplished. 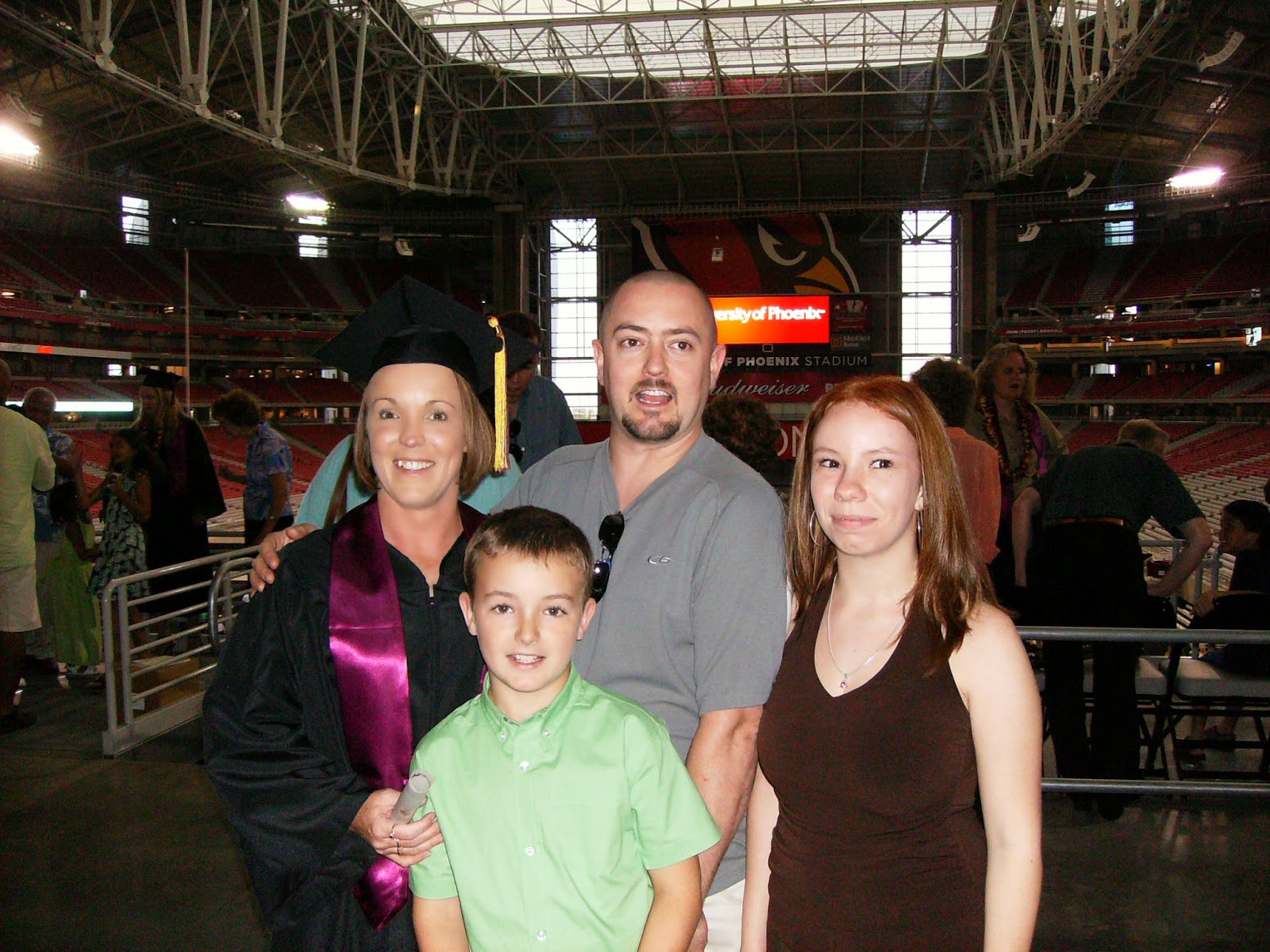 In fact, we are more than proud. Since Dayna never reads our blog, I can let everyone know just how proud we are of what she has done and what kind of woman she has become. She has certainly done it the hard way. She dropped out of high school and got her GED. She then worked for a few companies before starting her own company and learning many lessons of life. She then enrolled in a college program that demanded much more discipline and dedication than any regular college, and for five years she devoted herself to it. She graduated with mostly “A’s” and a BS in Accounting while at the same time was a mom and wife, and held down a full time job that should have been filled by someone who with a college degree. She did not get much sleep, but never missed a little league game or dance program for her kids. She is quite a young woman and we think she is very special. We love you, Dayna.

Sunday we first visited Lauren’s Institute for Education (LIFE) that will open in August. It is a therapy center that Carrie Reed has dreamed and willed into existence. It is a tremendous undertaking that will provide a centralized therapy center for special needs children in the southeast valley. Afterwards we all spent the afternoon at Brian and Carrie’s home in Queen Creek for a graduation pool party for Dayna and Devon (who graduated with high honors from Harvey Mudd College). There were lots of proud parents, grandparents, friends and relatives there. The whole Arizona clan was in attendance, including Mark and Heather. We thank Brian and Carrie for opening their home and hosting the party.

Monday morning we all headed our separate ways. We took Chris to the airport at 9 and Dayna, Crystal, Deidra and Dom left by car for New Mexico around 10. After watching “Letters from Iwo Jima” with Daryl and Gisele we left for the airport where we said goodbye to hot, hot, Phoenix. Off to Seattle and then on to Anchorage where we retrieved our truck and finally made our way home. Home is where we park our RV.

It was a busy, exhausting, emotion-filled weekend but extremely satisfying in seeing the first of our family graduate from college! The only disappointment was not having Darin and his family join us for this momentous occasion.
Posted by Richard at 4:45 PM