Landing on a Glacier

We left Anchorage, hopefully for the last time, and headed north. In only about 30 miles we left most of the traffic behind and were out in the wilds of the North Country once again. After a lunch stop along the highway we took the spur road toward Talkeetna, about 125 miles from Anchorage. Almost immediately after leaving Anchorage the skies cleared and the temperature climbed into the 70’s.

Talkeetna is a historic town at the meeting of three rivers that has become a tourist mecca. The streets in the downtown area are lined with gift shops and restaurants, and there is even a mule wagon you can take a tour in. Many of the buildings are on the National Historic Register so it is an old town, but it now makes it living by selling souvenirs, fishing trips, jet boat rides and, of interest to us, plane trips up to Denali.

We made our usual grand entrance into town. There is a small town square and when we pulled in with our trailer in tow, all 200 or so people stopped and starred as we drove around the square. I guess it is nice being noticed, but it sure makes me nervous about my driving and shifting. I want to look like I know what I am doing so I am even more cautious than normal. Whenever we stop we still get stares, and an amazing number of people stop and talk to us about our rig. Universally they are impressed and even more so when I tell them the truck cost less than a new pickup, has 525 horsepower and gets over 8 MPG towing the trailer.

We signed up for a 7 PM sight seeing trip to the mountain that included a landing on a glacier. Their planes are equipped with skis so this would be a first. There were clouds as usual around Denali and even some thunderstorms roaming the area, but we flew up over many of the glaciers and dodged the storms easily. As we climbed into the mountains it grew more and more impressive. The ruggedness of the mountains and the scouring, flowing glaciers, the blinding white of the snow on the mountains and the clouds we were flying around combined to make it spectacular. It was true mountain flying as we skimmed over passes and flew right next to huge rock walls. 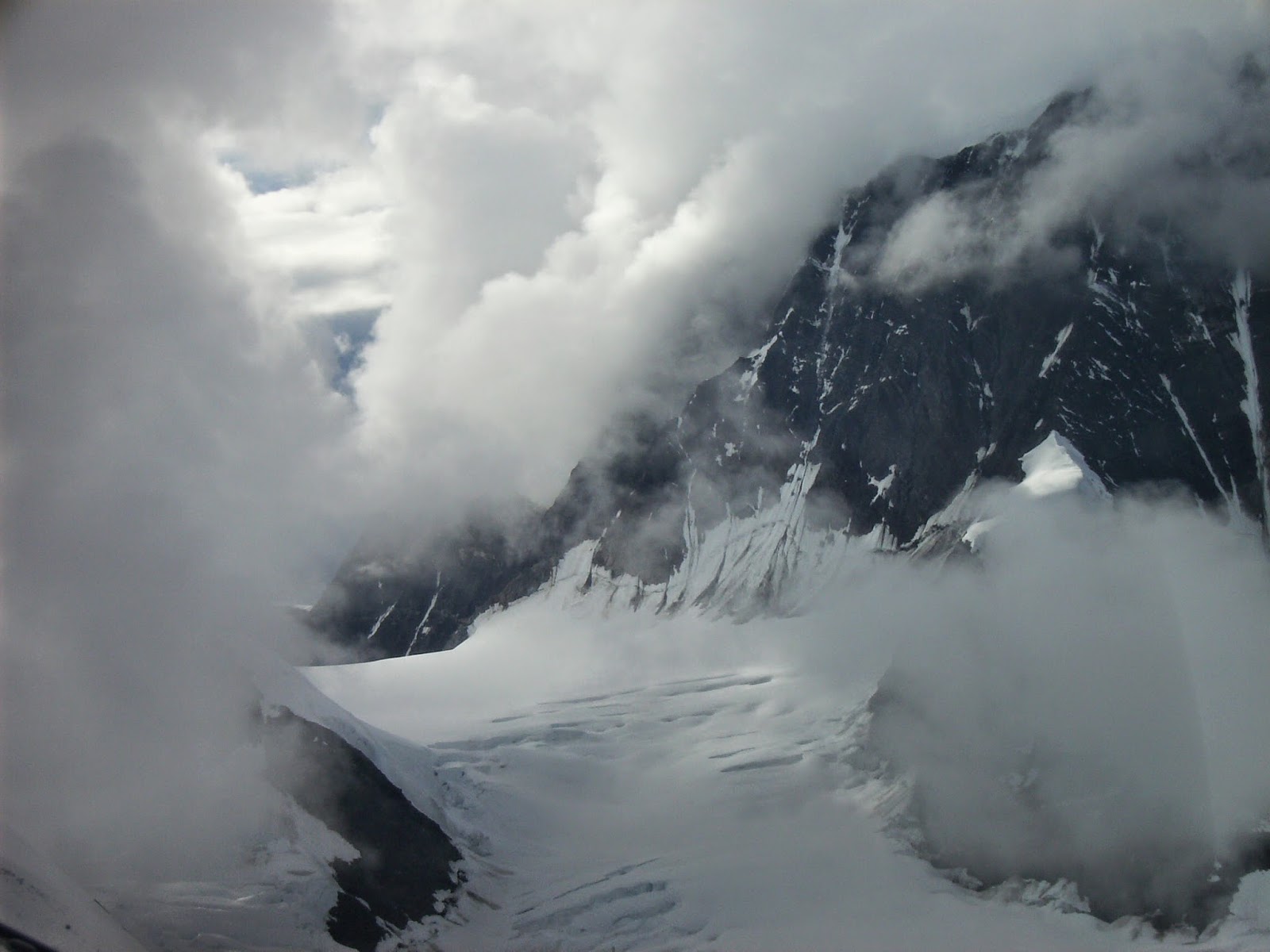 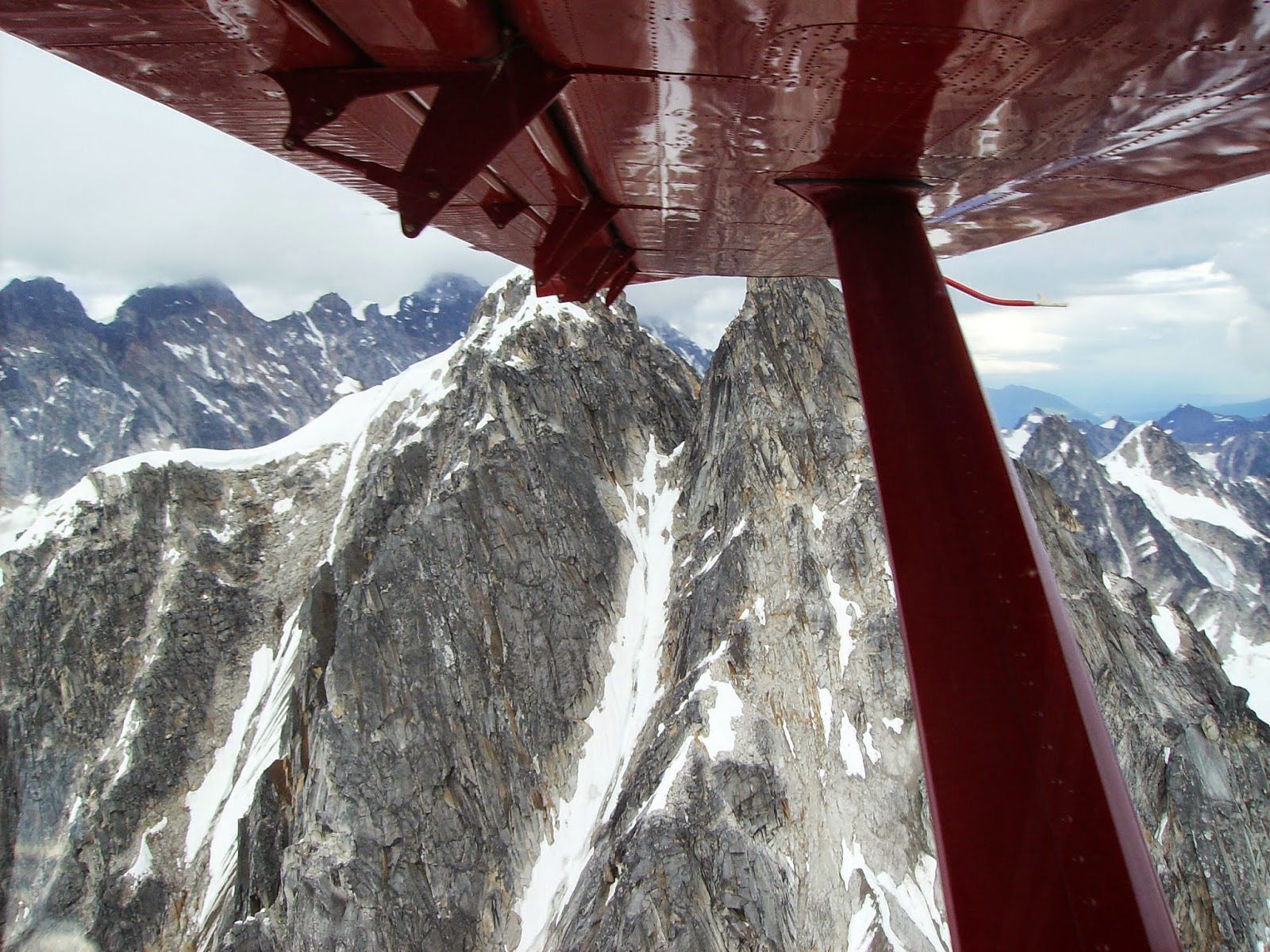 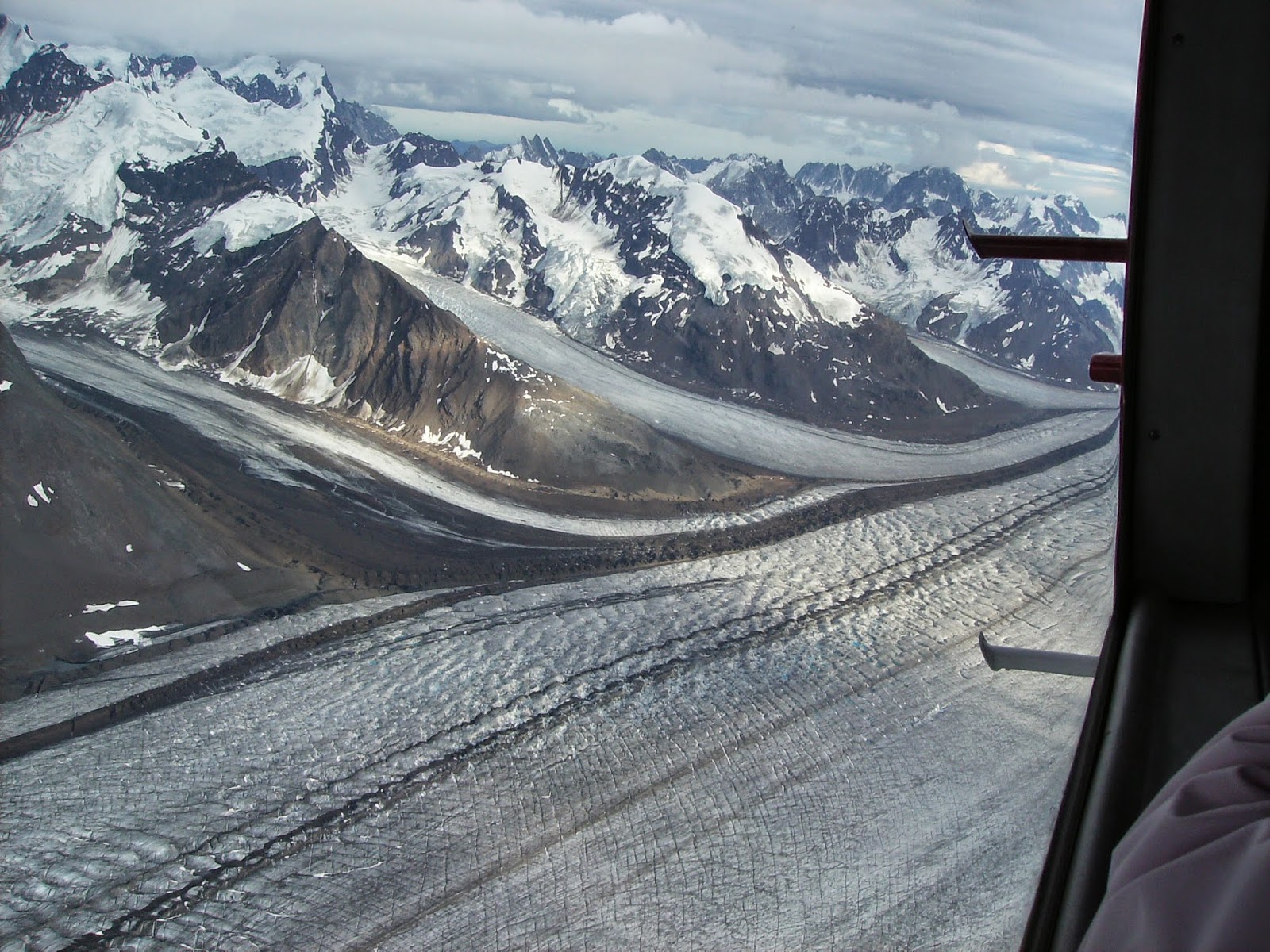 The clouds parted and we were given a fantastic view of the summit of Denali, floating above the lower clouds. 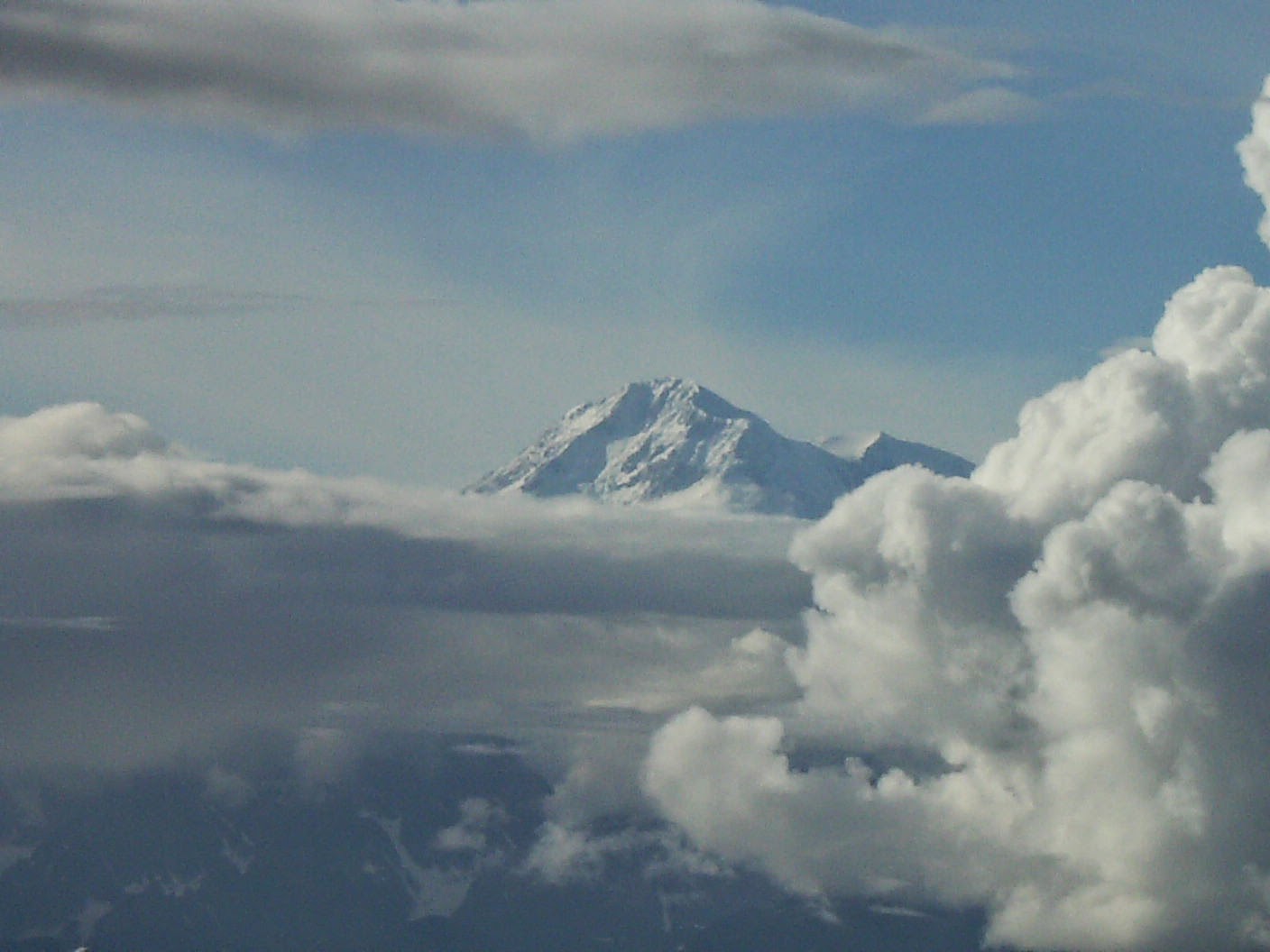 Our pilot has been flying in Alaska for over 30 years, and the plane was an almost new 8 passenger turbine DeHaviland Otter which is one of the best bush planes ever made so we felt very secure as he zoomed and swooped around mountain bowls and finally made a circle approach to an uphill landing on a glacier in an area known as “base camp”. It is where all the climbers start out from when they climb Denali. Landing on skis, which are lowered hydraulically below the wheels, was a lot rougher than landing on wheels. The snow was very soft and he later said he would not be returning to that spot again until it gets much colder. 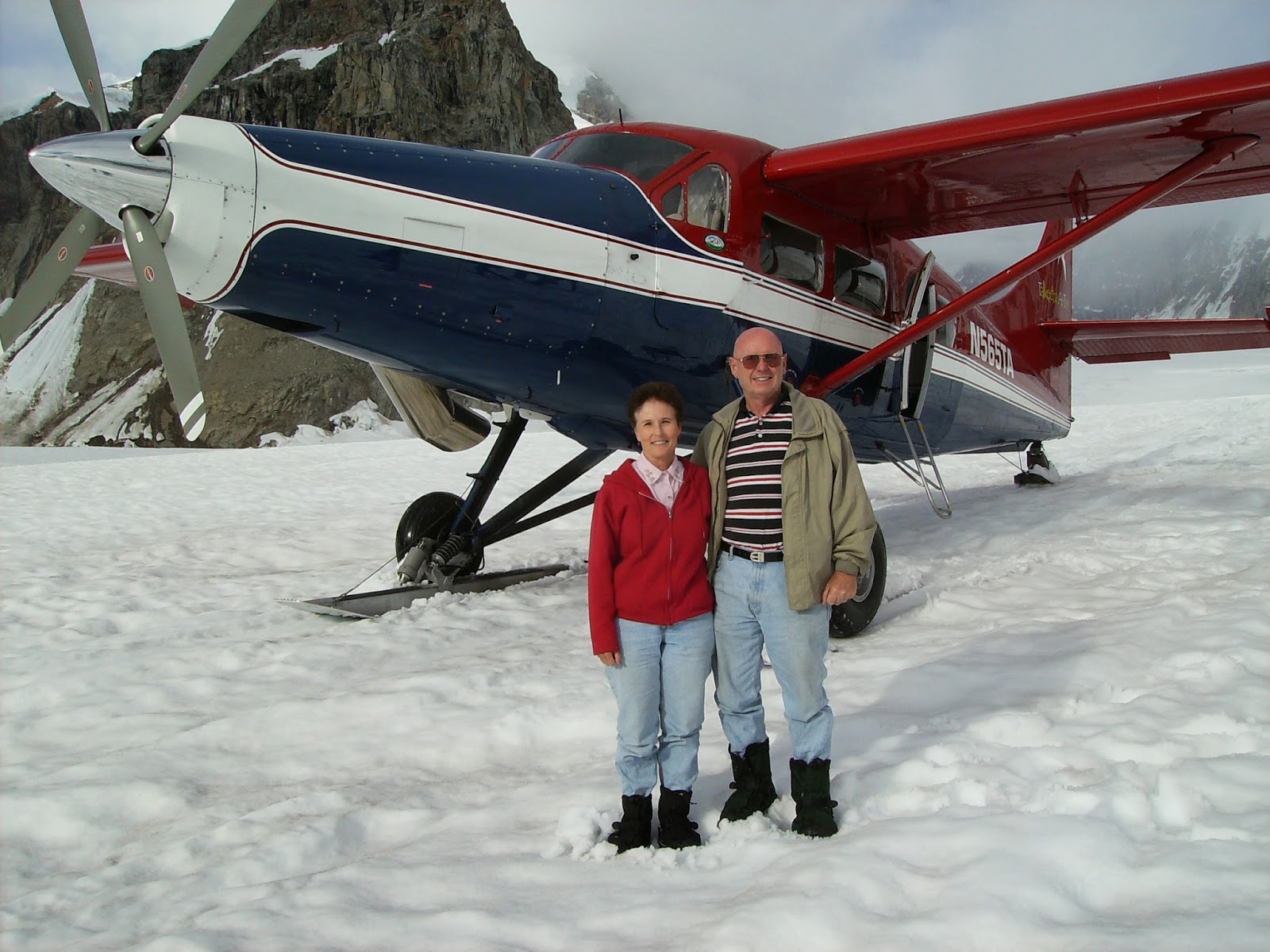 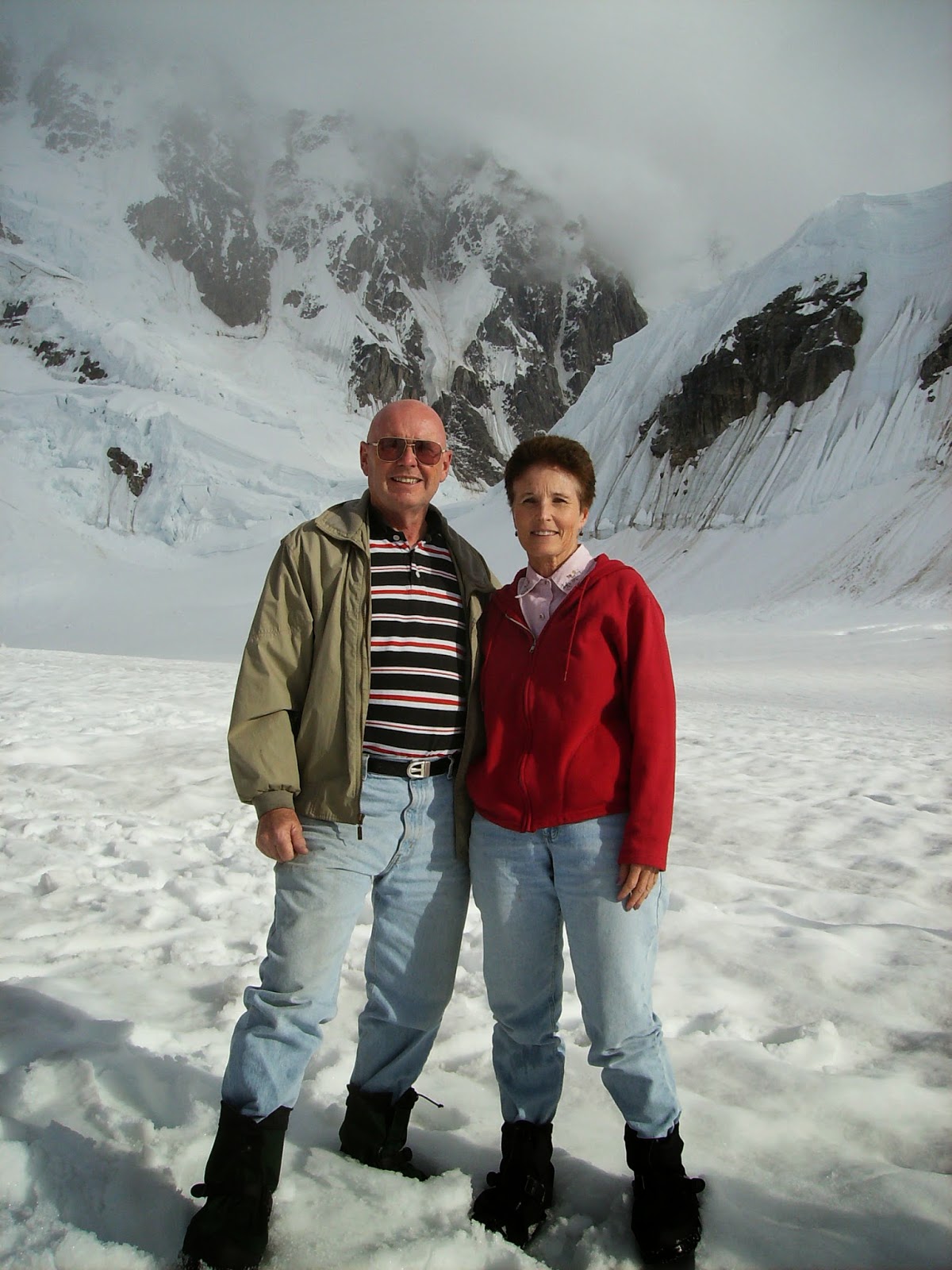 We all got out and spent about 20 minutes taking pictures, sinking into the snow, watching snow and rock falls on the mountains around us, and soaking in the majesty and grandeur of the place. It was a wonderful experience. 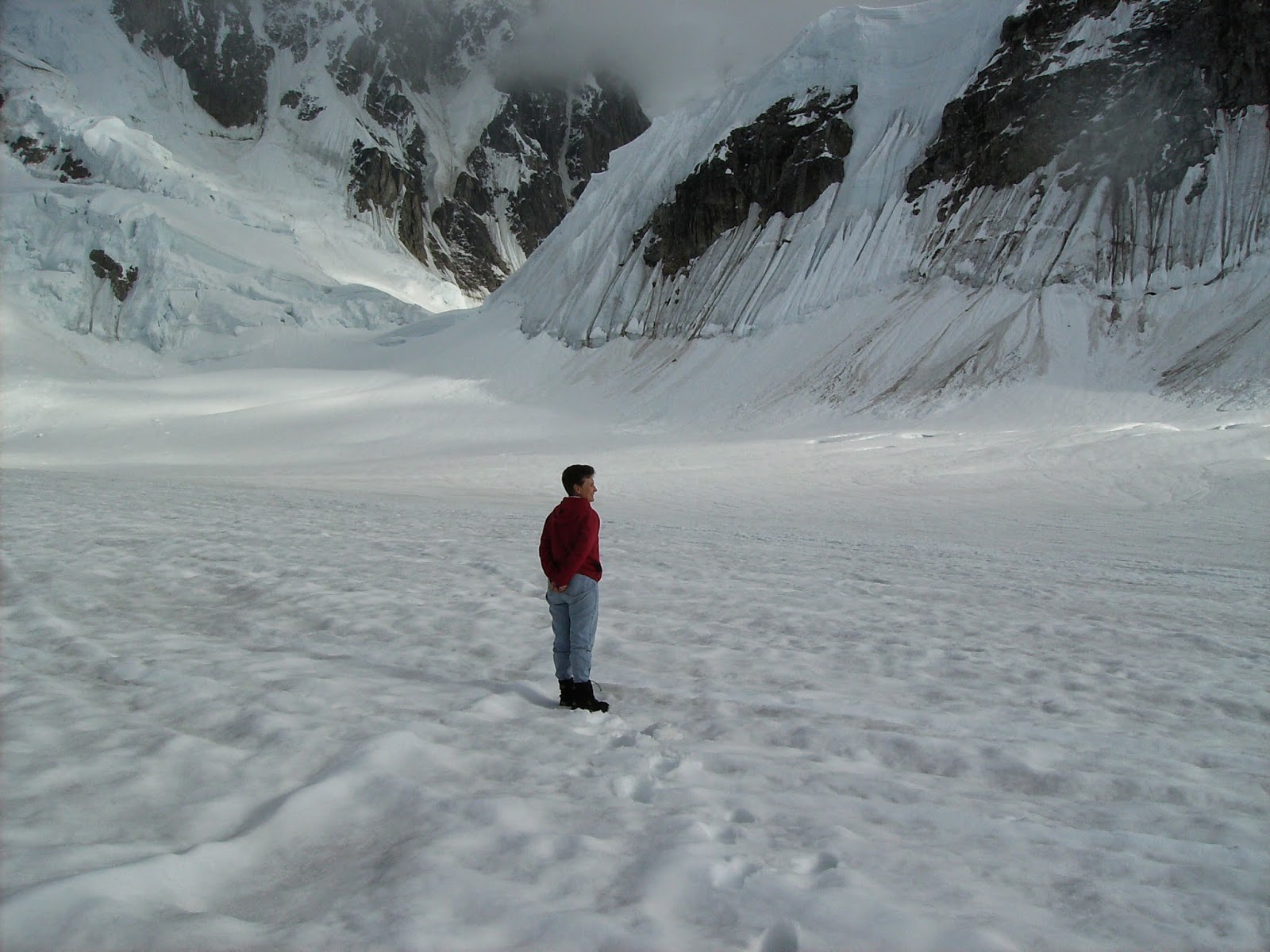 On the way back to Talkeetna we flew over lakes, rivers, gold mines and a lot of muskeg. 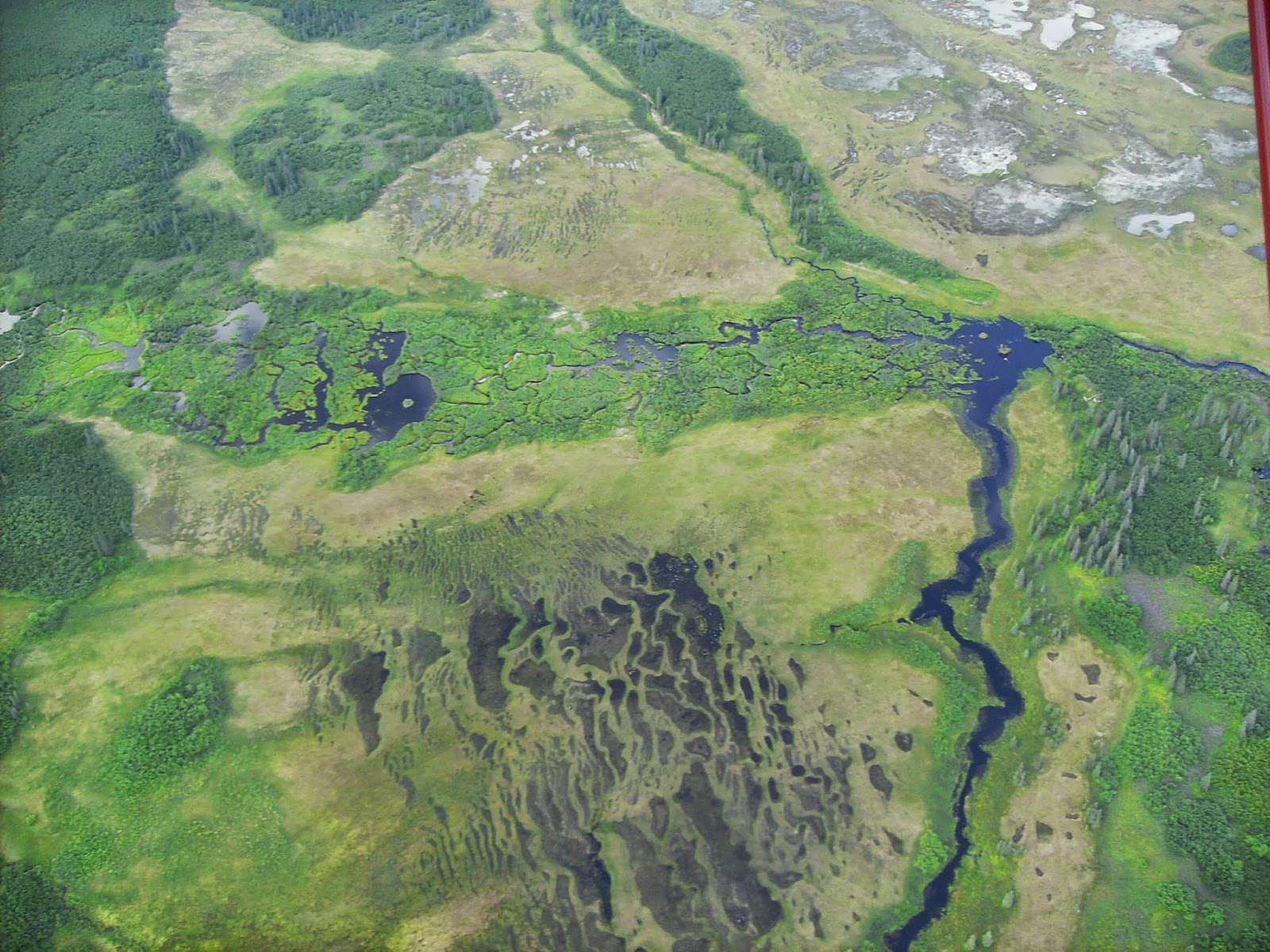 If you want to see all the pictures we took you can see all 63 on our gallery.


We had parked the truck and trailer on an empty lot near the airport and decided to just spend the night here. One of the great things about Alaska is that you can park just about anywhere and no one cares.

It was a great day. Tomorrow we continue our trek toward Fairbanks.
Posted by Richard at 10:38 AM