We got up at a decent hour today and made preparations for an outing. First was a trip to the nearest Starbucks so we could use the internet to post on the blog, pay some bills and send and receive emails. The big Starbucks on Tudor was our first stop. They told us none of the Starbucks in Anchorage had internet but another customer said the downtown one did. So we went downtown and found a place to park. Parking in the big truck is not always the easiest thing to do. Unfortunately, this Starbucks did not have internet access after all, but one of the employees there told us of another coffee house just a couple blocks away that did. We walked over there and found that he was correct. In addition to internet access, Deidra says they have the best caramel something or other drink she has ever tasted. Mission accomplished.

Next we decided to go to Thunderbird Falls. It is about 25 miles north of Anchorage and listed in our guides as a nice place to visit. There was a one mile hike up to the falls and we were very disappointed. I guess the falls were OK, but after what we had been seeing on our trips to Skagway and Valdez, this falls was not much to look at. When we got there we all looked, said “That was a waste of time!” and left. Worse yet, we had to pay $5.00 just to park for the 45 minutes we were there.

Next was Hatcher Pass and the Independence Mine State Historic Park. It was about another 25 miles further north up through Palmer. The road followed a beautiful stream that was rushing over many, many rocks. It was a very overcast, drizzly day and as we climbed higher we found the clouds. The last five miles were in dense cloud, at 15 MPH with four way flashers going. Visibility was 25 to 50 feet at best. We finally found the place and took a walking tour. It was very strange to be walking around in such dense fog and drizzle. If they had not had maps, plenty of good signs and well marked trails we would have been hopelessly lost. The mine closed in 1943 and was interesting. They had several places where you could enjoy panoramic views of the mountains above and of Palmer below. You couldn’t prove either existed by us. There was a place you could pan for gold in a stream in the park, but we did not have pan, shovel or the inclination to spend any more time in the clouds and cold rain. 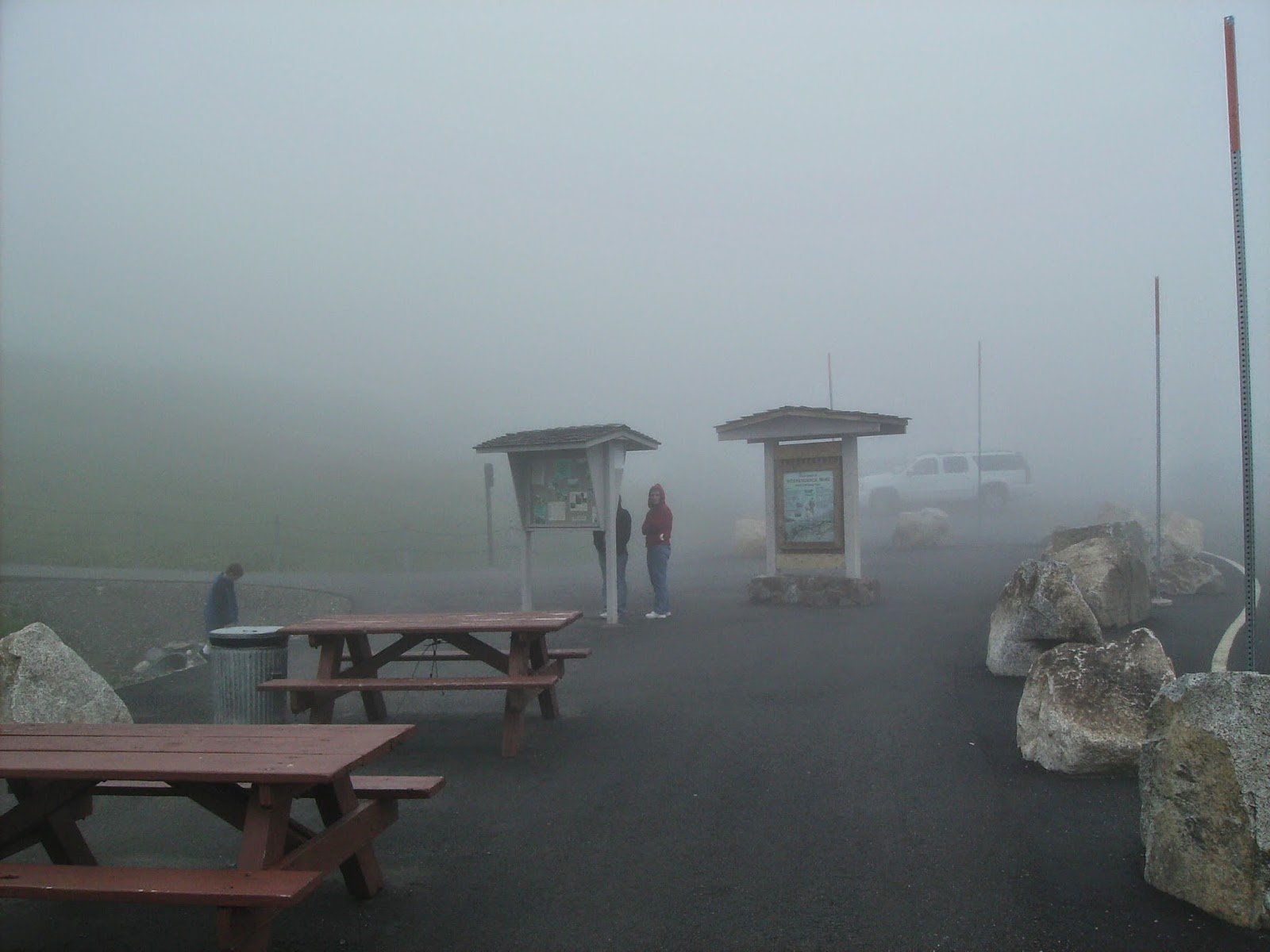 We returned to our campsite in Centennial Park and did a couple loads of laundry in preparation for our leaving for Phoenix. Deidra worked on her hooked rug and Dom played with dominoes again during the evening. It was an interesting last day of seeing the sights for Deidra and Dom.
Posted by Richard at 11:51 AM