We awoke to rain again this morning. It was not just a drizzle – it was a heavy rain, with low clouds in the fjord and no sign of any let up. We had seen all we wanted to see of Hyder and hoped that the weather was better inland, so we packed up in the rain. That is not a lot of fun but I had my motorcycle rain gear so out I went. Dianna got the inside ready and I waded through the lake in the parking lot to get the truck hooked up. Yuck.

After negotiating the muddy, pot holed road the mile to the border we stopped at Canadian customs. This surely seems strange to me. There is no stop required when driving into Hyder. In fact, there are no US border patrol or Immigration people there. But when you drive out of Hyder into Canada you are stopped and have to show passports and answer the questions about where you are going and if you have guns, mace, alcohol or tobacco. There is no way to get to Hyder except through Stewart, and no way out but the way you came in. Where do they thing we have been?

With that we left Alaska for the last time. The road up through the valley was even more spectacular than when we came down because all the streams and waterfalls were flowing with more force from all the rain. The clouds and fog kept us from seeing the tops of the mountains, but what we could see was worth looking at. 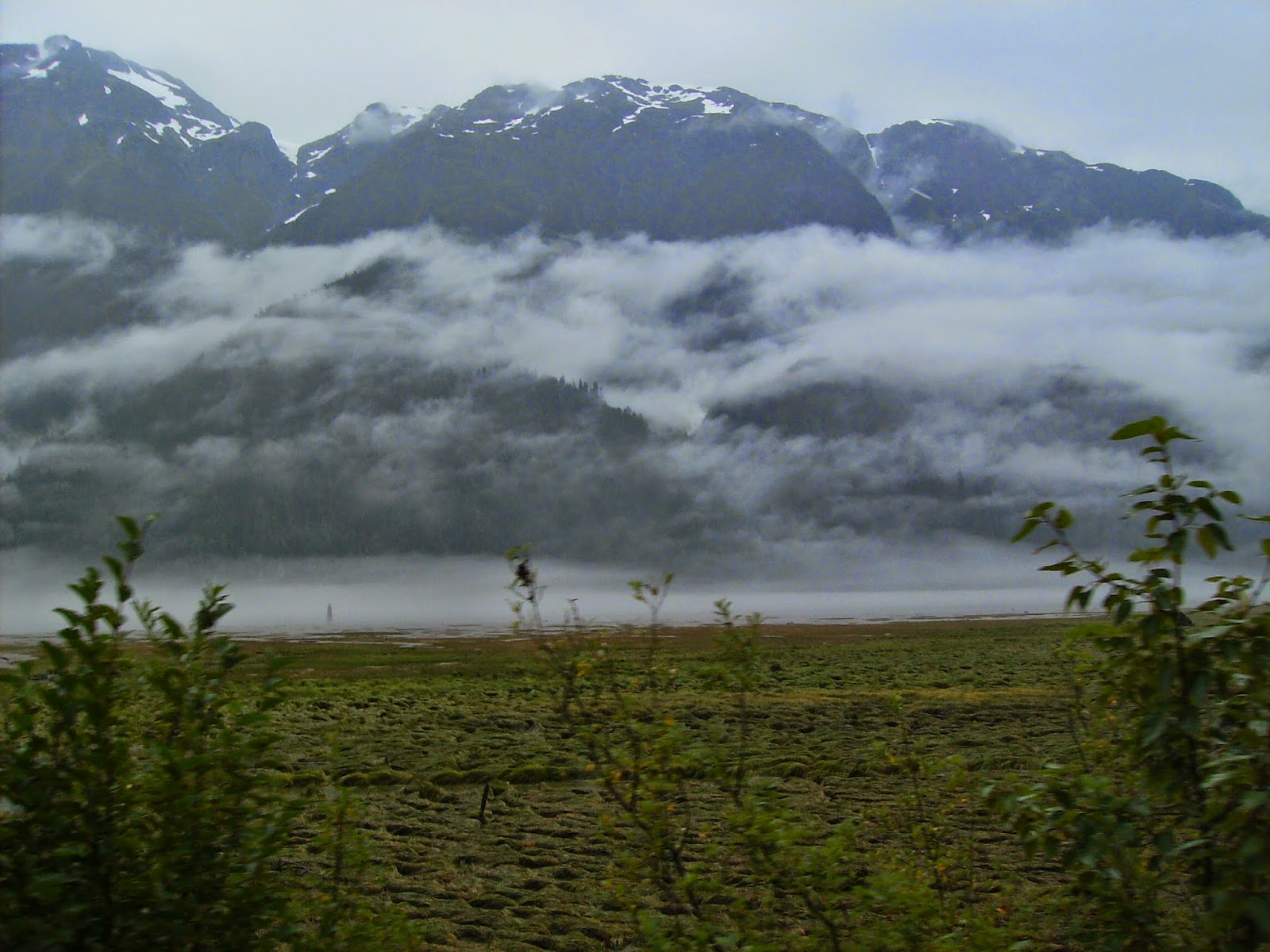 We kept the speed down to 45 until we reached Mediazian Junction where we picked up the Cassiar again. The rain did let up some and by afternoon we had periods of sunshine, although you would still call it a rainy day.

It was a good day for viewing wildlife also. On the way we saw a total of three black bears and one fox alongside the road, but none of them were interested in posing for a photograph.

After a lunch break in a muddy rest area we stopped in the little native village of Gatanyow to look at some totem poles. They sure were tall and very interesting. 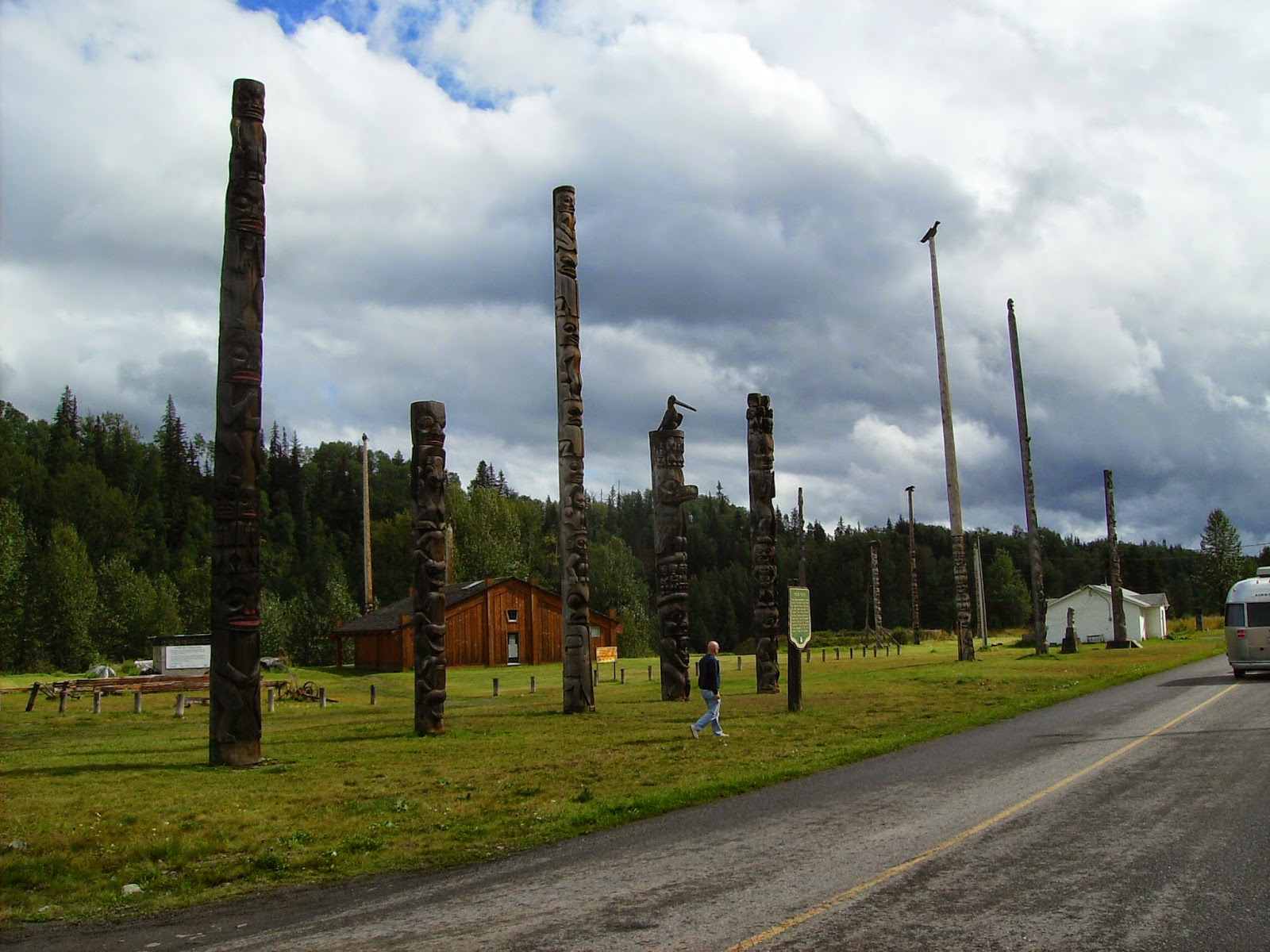 After crossing the Skeena River we drove into the town of Smithers, BC. It was the first town that actually looked like a town since we left Fairbanks. I’m not sure why, but Whitehorse still looks like a frontier town, even though it is a good sized place. Smithers could be any small town in the USA, or Canada for that matter. It has chain stores, parks, traffic lights and other trappings of modern life. We also began to see farms again, with cattle grazing in the fields and tractors putting up hay for the winter.

We stopped at Tyhee Lake Provincial Park for the night. We drove through the campground to find a spot but found nothing we could get into with our big rig. The sites were long enough, but the road was too narrow to make the turn backing into them. I spotted the campground host and stopped to ask for a suggestion. He told us we could camp in the day use area for the night, so that’s where we are. It’s not much of a campsite, but the park itself is gorgeous. BC sure knows how to build beautiful campgrounds, even if they are sometimes too small for us.

I realized, after leaving Hyder, that despite the horribly rough and sometimes nerve shattering roads, the unending days of rain, clouds and fog, and the hordes of biting insects I will miss this remarkable country. I will miss the vast mountain vistas, the unbelievably beautiful glaciers, the rough and wild and the placid and meandering rivers, the thundering waterfalls, the gorgeous wildflowers, the changing seasons, the fascinating wildlife – mammals, birds and fish alike, and the rugged people who live here – people who appreciate what they have and, by and large, live much simpler lives than any of us would or could. We will miss the endless experiences; walking on, cruising by or flying over and landing on glaciers, watching clammers in Ninilchik, fishing for halibut in Homer, actually seeing Denali, driving across the North Slope and swimming in the Arctic Ocean, watching the wildlife and just looking at mile after mile of the most gorgeous scenery in the world. It’s been a once-in-a-lifetime trip and one we will remember forever. Farewell, Alaska.
Posted by Richard at 12:56 PM