Since this was our second night out, we knew where everything in the truck was stashed, so it was easier getting coffee made, breakfast eaten and on the road again. We left the campground at 10 AM. That’s OK – we’re retired!


The terrain continued to be rolling hills and we could see some taller mountains off to the northwest. We are always on the lookout for animals and soon spied a good sized caribou standing on a knoll a few hundred yards off the highway. We were not the only ones to see him. This is hunting season for caribou and a hunter had parked his truck and was stalking him. The rules prohibit using anything but a bow and arrow within 5 miles of the pipeline, so he had to get reasonably close to take a shot. I watched through binoculars as he took his first two shots. Apparently he missed and the caribou did not hear the arrows because he never moved. He just continued to look around. The third shot did not miss. He ran about 25 yards, stopped and then fell to the ground. For those who are not hunters it would be gruesome to watch and Dianna did not enjoy it. I found it interesting to watch and was impressed by the distance the hunter shot from. He will feed a lot of people many meals. 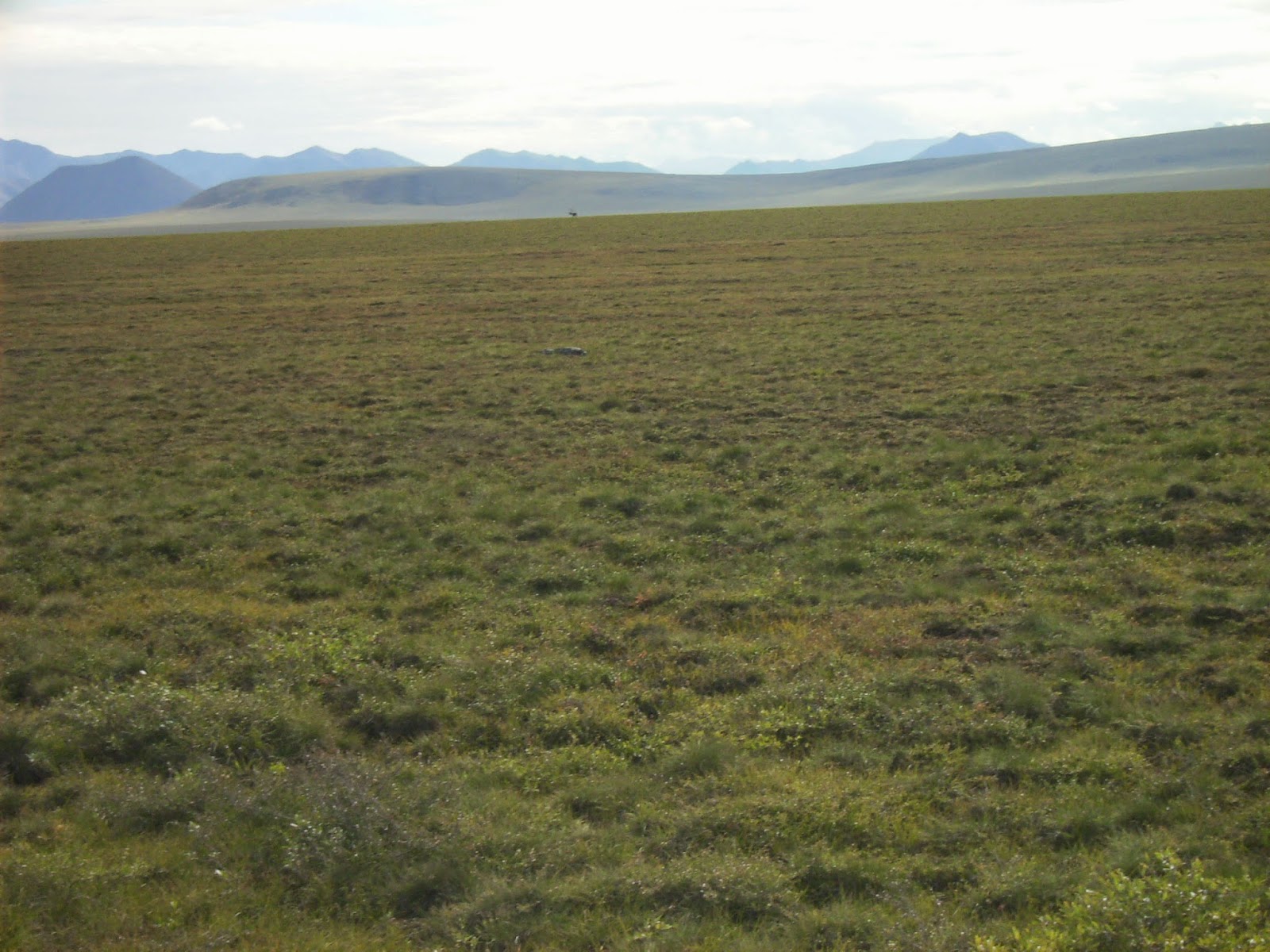 We soon began following the Sagavanirktok River, which the locals call “The Sag” for good reason. We followed it for the last 100 or so miles into Deadhorse. The land became progressively flatter as we left the north slope of the Brooks Range and entered the coastal plain. It also kept getting colder and dropped to 50. About 35 miles from Deadhorse we saw a huge herd of musk ox. They are fascinating animals who live up here all winter, even when it is 80 below. They were very near the highway and we had a chance to watch them for a while. 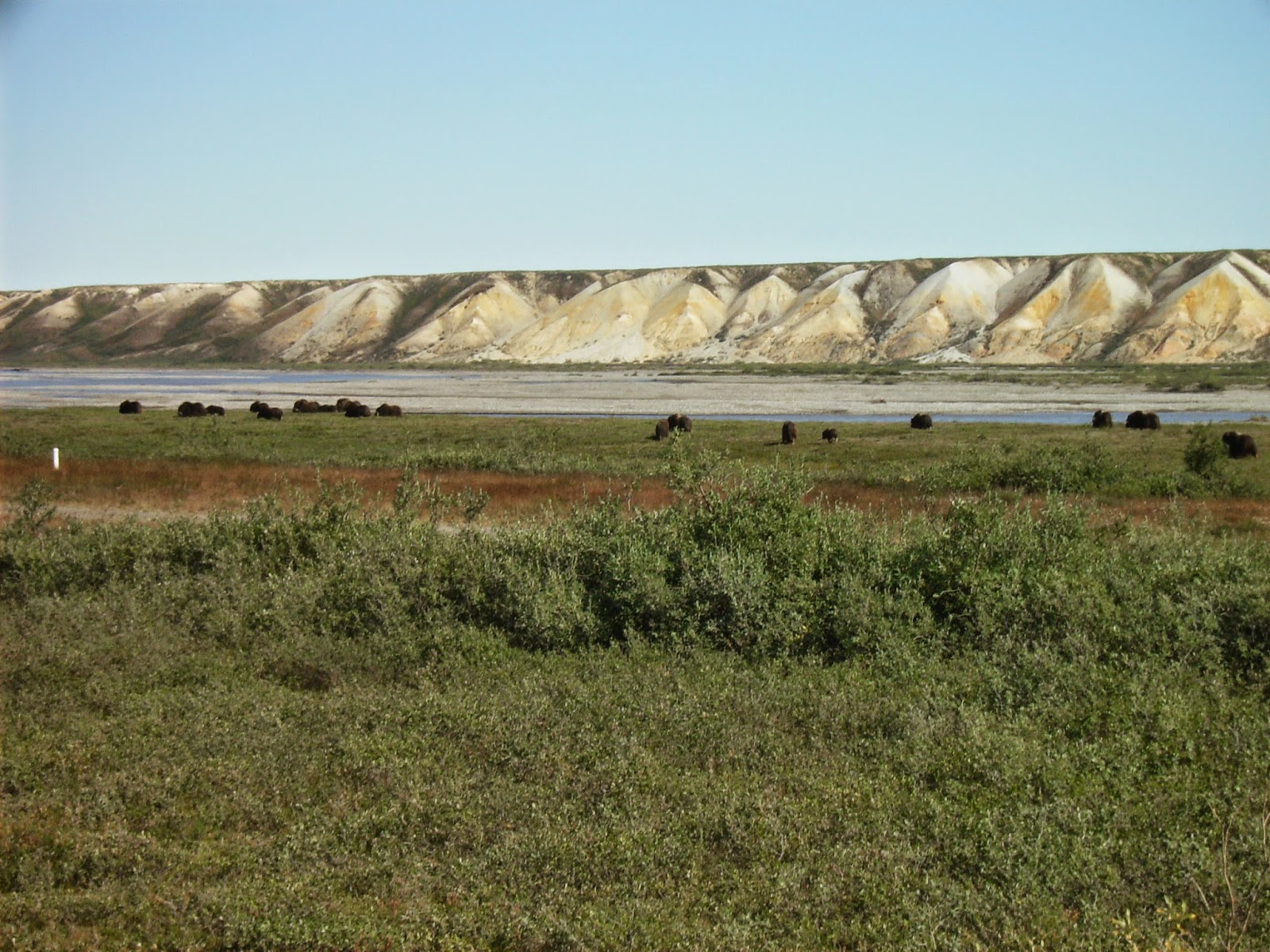 At times we don’t see another vehicle for more than half an hour. It is a very remote place. Most of the vehicles on the road are trucks hauling loads between Fairbanks and Deadhorse. There are also many pickups that belong to the pipeline company and some private pickup campers. We also see quite a few motorcycles, but they are the special off road rally type, not Gold Wings or highway bikes. There have also been a few 4 wheel drive SUV’s, but not many. We have seen a few regular passenger cars and only two motorhomes. There have been no RV trailers. I bet those who have driven motorhomes and passenger cars wish they had not. This road is no place for such vehicles. Just 25 miles or so south of Deadhorse we saw an overturned passenger car off to the side of the road. Our truck has been a great vehicle for this trip. The big tires smooth out the bumps as much as can be done, and we feel very secure and comfortable traveling in it.

Then we drove on into Deadhorse. It is the end of the road and the farthest point north you can drive to in North America. It is an industrial town that was built to service the oil fields. It is not a fancy place. It looks like an oilfield. Even the $200 a night hotel looks like another of the prefab industrial buildings. It looks about the same on the inside. 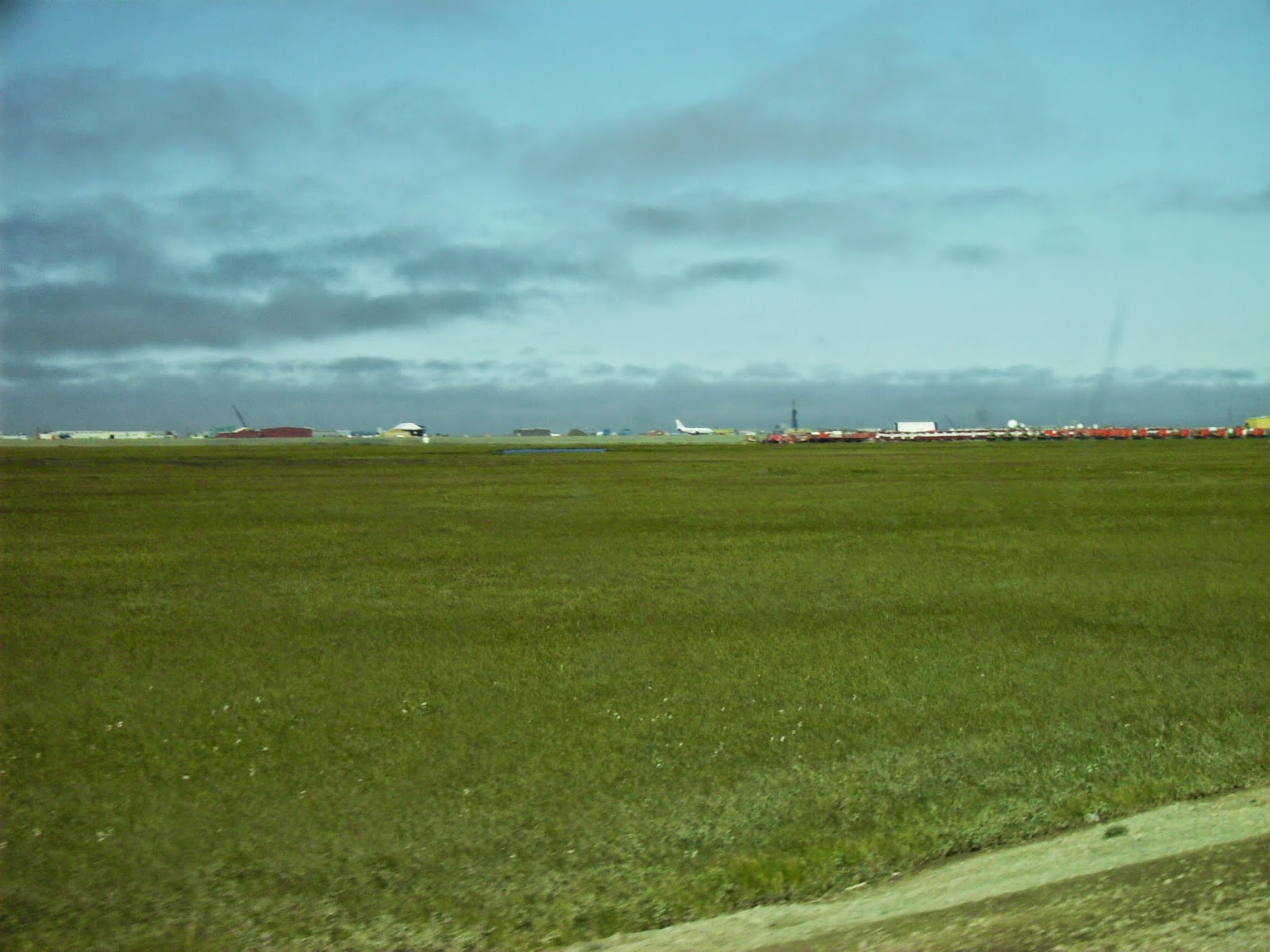 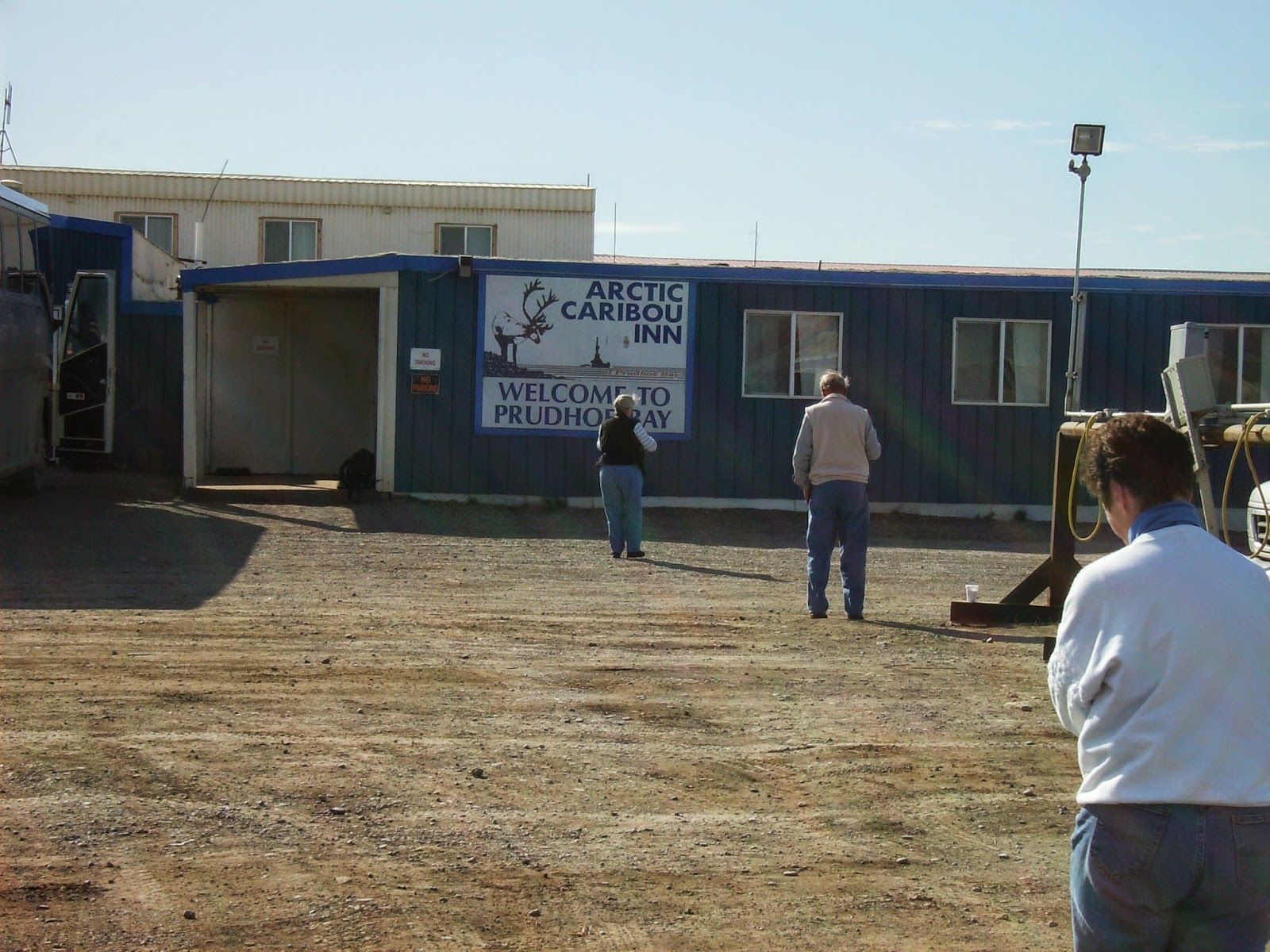 We went to the general store, which has a great supply of most everything you could want, except food. There is no place to buy groceries north of Fairbanks. You have to bring it with you or eat at the few cafés and restaurants along the way. If you rely on them you will get hungry because they are few and far between. At the general store Dianna bought a special tee shirt that said Polar Bear Club on it. It is for those who take a dip in the Arctic Ocean.

We drove around town just to see what’s there and saw many caribou wandering around. They must know that there is no hunting within about 5 miles of Deadhorse and so they are safe here. Just a few minutes ago a red fox ambled from the river up toward the airport. He passed within 25 feet or so of the truck. We have certainly seen some incredible wildlife. 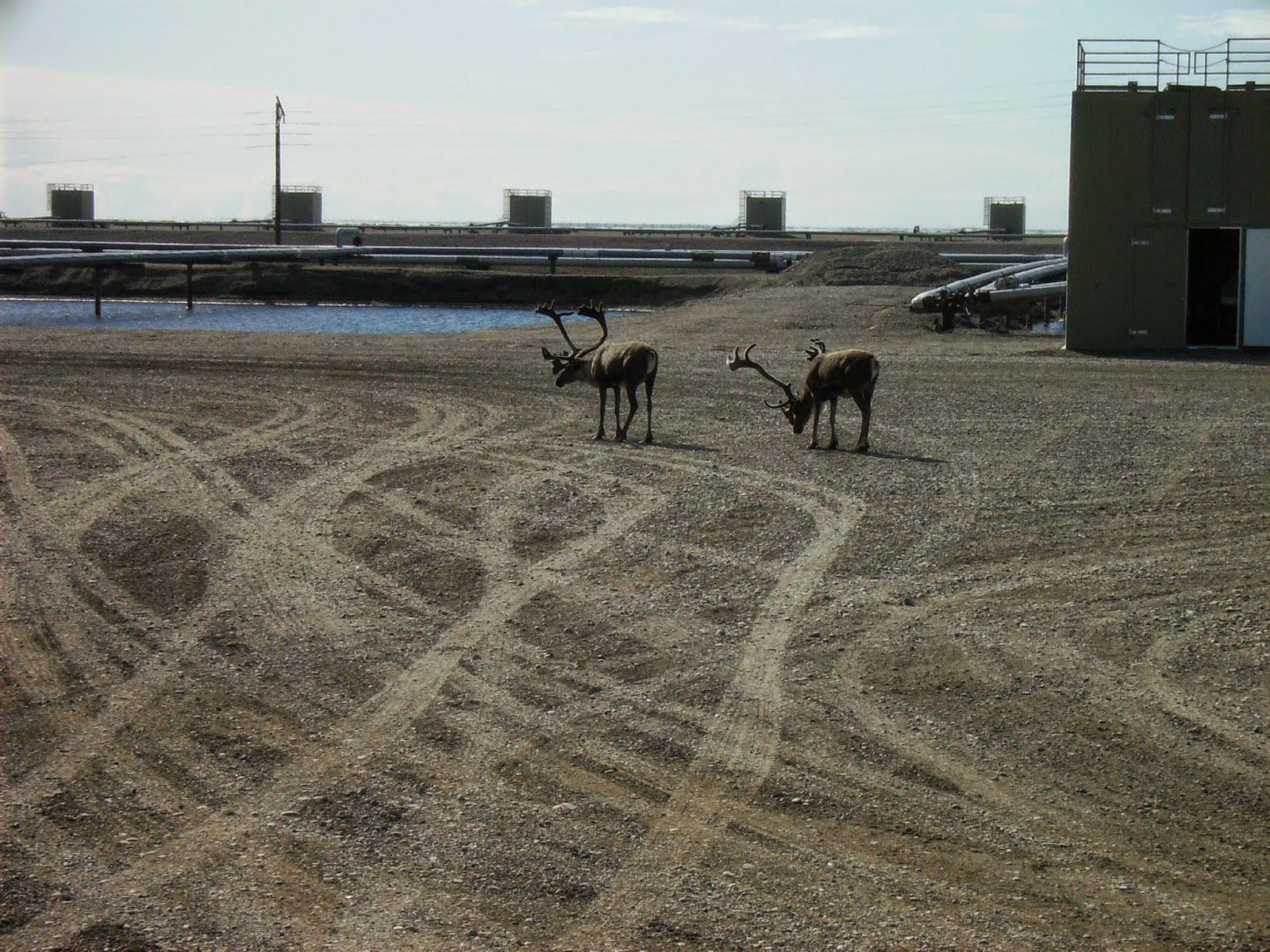 We parked for the night along the river near the airport. As I write this at 8:30 PM it is 41 degrees, the wind is blowing hard and the fog is coming in so that the visibility is now about 100 yards. I think the truck is going to idle a lot tonight to keep us warm.

We are both in awe of the place and keep pinching ourselves to realize where we are. It is a place few visit and we feel very fortunate to be able to do so. We will remember this place and this adventure for the rest of our lives.