It rained again during the night and we awoke to low clouds, fog and more rain. I checked the weather report and it sounded like it might clear up so we kept up hope. While I was sitting at the table eating breakfast about 8:30 I saw a female moose trot right in front of the truck and across the RV park to the meadow beyond. That was the closest encounter with a moose so far. If I had been outside I would have been concerned.

Sometime later, about 10 AM or so, an ambulance went by with his siren blaring. We wondered where he was going.

By about 11 it looked like it would be fine for travel so we got hitched up and left the campground at a few minutes past noon. I wanted to wait for the road to dry out since I am not a fan of mud. We had plenty of that on the Dalton Highway and I did not want to clean the trailer as well as the truck.

The dirt road had started just 2 miles before we got to Chicken and the Milepost guide, as well as everyone we had talked to, warned us about the hairpin turns, steep grades and narrow road. They were not kidding. Although the Dalton Highway was also dirt it was pretty well taken care of in most places and the turns were reasonable for larger vehicles. This road looks more like a Forrest Service logging road and the turns are very tight with no guardrails and very steep drop offs. I drove most of the time at no more than 25 MPH.

About 20 miles up the road, at a place the Milepost warned was particularly bad, we found out where the ambulances had gone to. In fact, just 5 miles earlier we had met not one, but three of them coming back toward Chicken. A motorhome with a car in tow had cut a right hand hairpin turn too close and gone over the cliff. It was down about 50 feet, upright but it had obviously rolled, and the still attached towed vehicle was upside down. It did not come apart, but I am sure both vehicles were totaled. I don’t know how they will get it out of there, nor do I know if anyone was hurt, but the ambulances were not running sirens or going fast coming back. Of course, a helicopter could have flown in without our knowing.

This is not a road for inexperienced drivers, which unfortunately many motorhome drivers are. I had no difficulty at all and would have enjoyed the drive if not for having to dodge pot holes and avoiding rocks and the muddy spots. Dianna was, as usual, petrified.

We arrived at the turn off to Eagle about 2:30. That was over two hours to go 30 miles. There is a large pull out just a couple hundred yards up the road so we found a level place to park for the night. We are on top of a mountain with fantastic views in all directions.


These two pictures do not do the scenery justice. They were taken from the same spot only 180 degrees from each other. Every other direction looks at the same view over distant mountains. 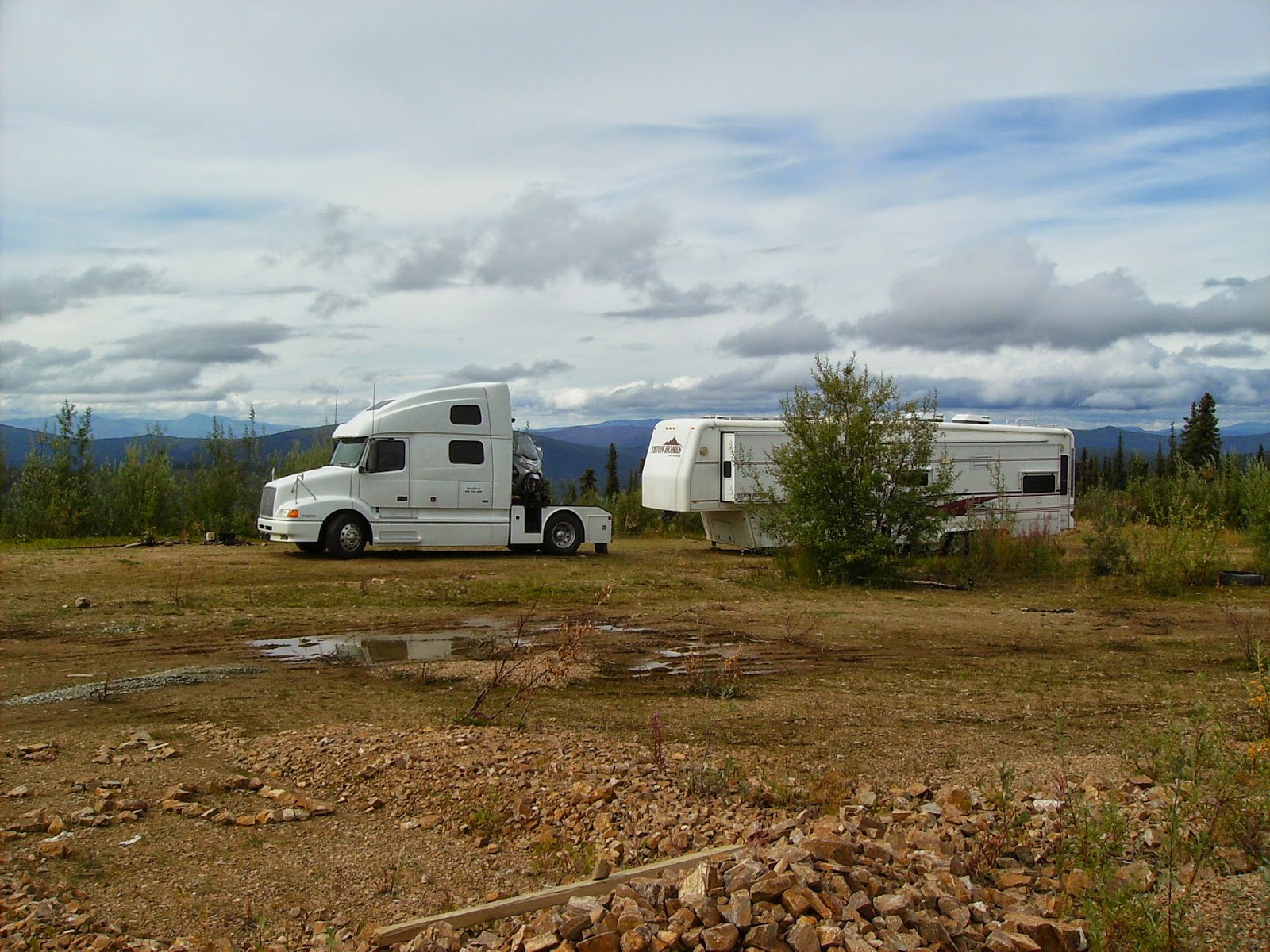 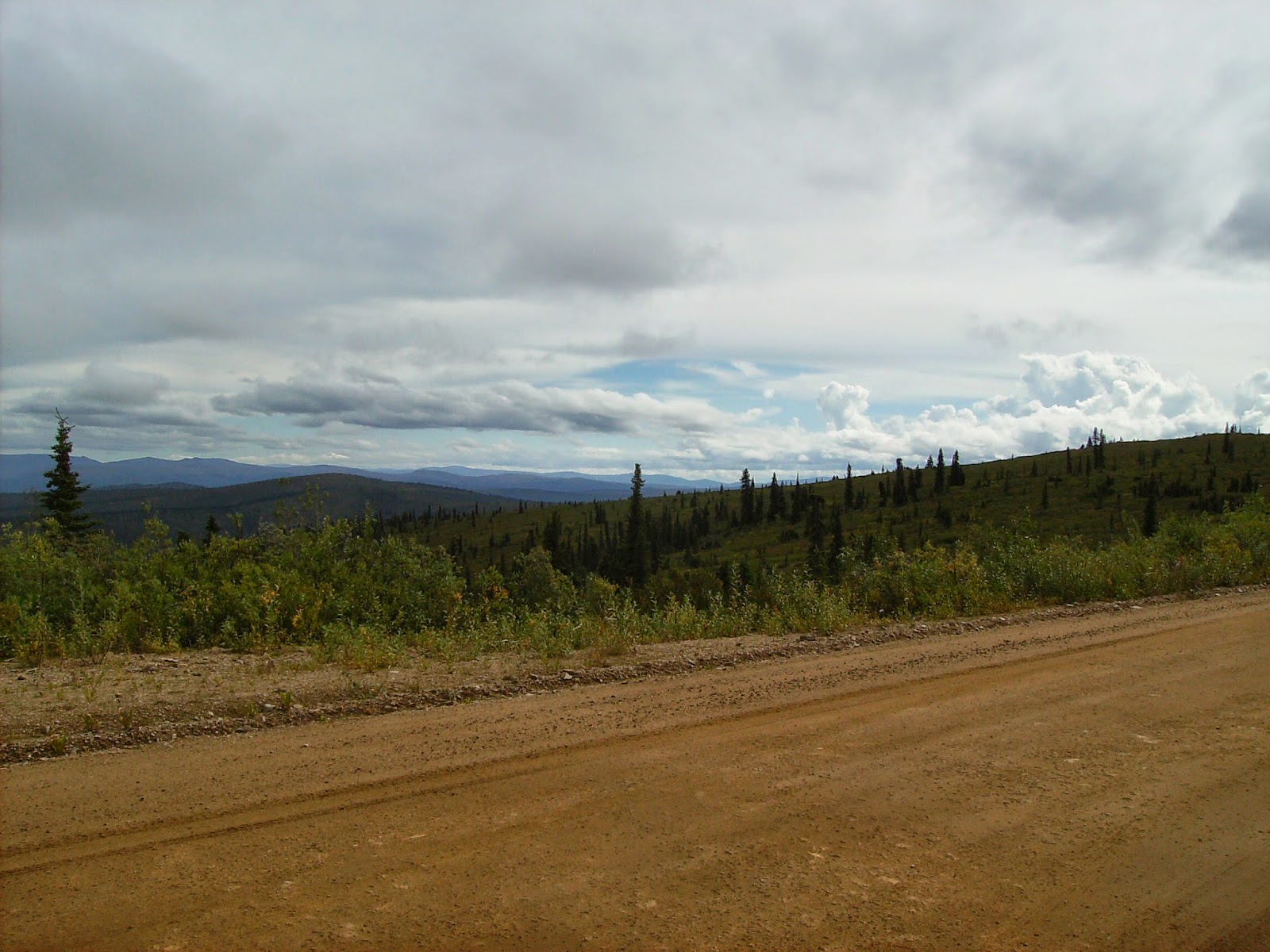 The weather forecast is for clear skies for the next three days so we will drive the truck to Eagle and back tomorrow. It is 70 miles each way, but with these roads it is probably a two to three hour trip going and coming. Most likely we will just stay here again tomorrow night.

We had baked potatoes to go with our halibut for dinner. I finished a book and Dianna worked on logic puzzles and cross stitch. It was a pleasant evening.
Posted by Richard at 9:27 AM