It was hot last night when we went to bed so we left some windows open and the fans running. During the night Dianna and I were awakened a couple times by a pesky fly that kept buzzing around our heads. That was annoying, but about 7 this morning I felt the kids moving in the trailer. I got up a few minutes later and found Deidra and Dom both up with a story to tell. It seems the window screen by Deidra did not get seated properly and there was a small crack at the edge. She was awakened about 6 by mosquitoes buzzing around her head. She got up and spent the next hour and a half killing them. She whacked one or two on Dom’s head which woke him up also. The two of them said they had killed over 30 by the time I got up. Before we left our campsite we probably killed almost that many again. Fortunately, no one was badly bitten, but we will all watch the screens carefully from now on.

We stopped at the visitor center in Delta Junction, the official end of the Alaska Highway, to take a picture and make a contribution to the local economy at the souvenir store. 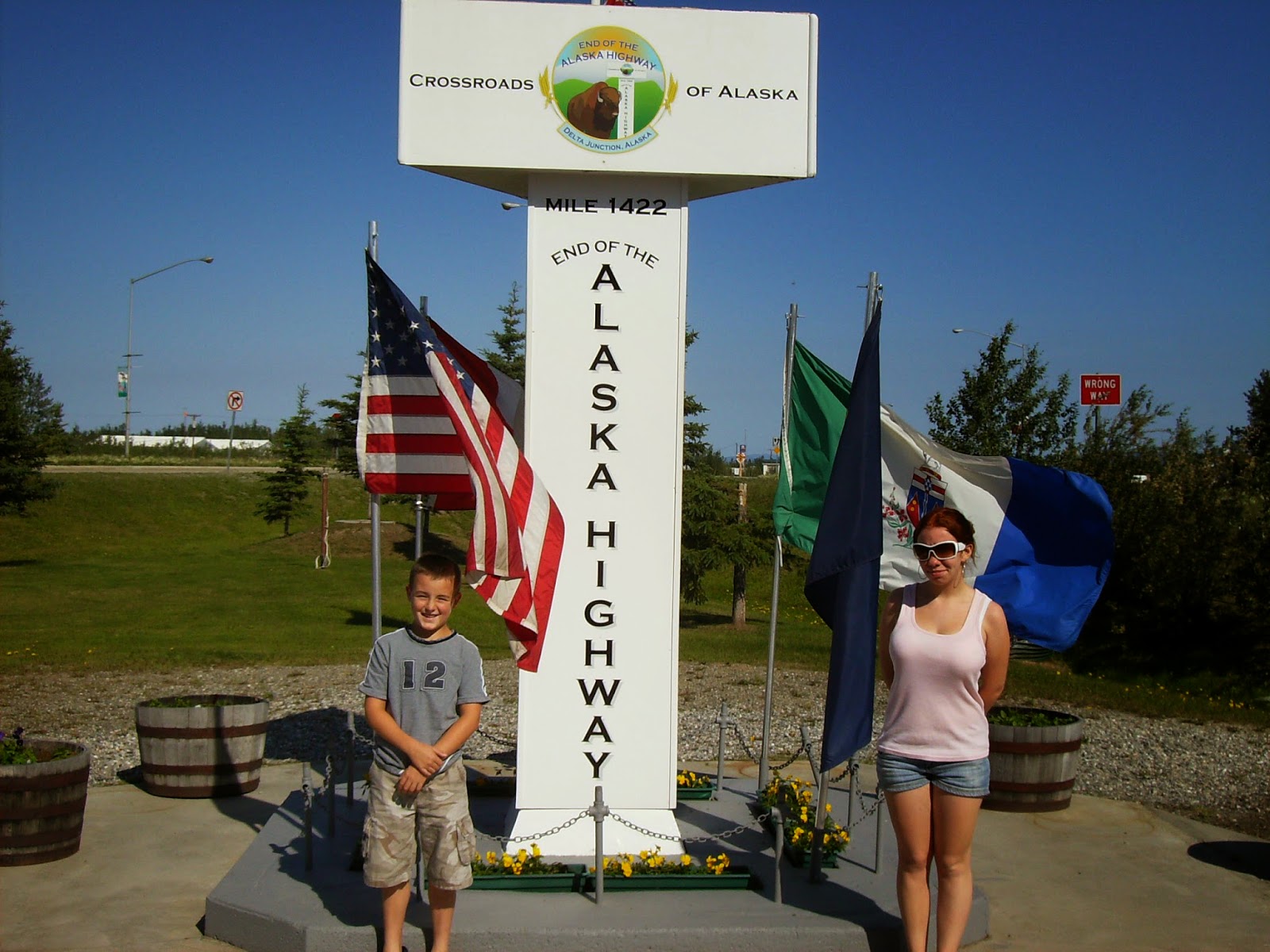 Just before arriving we saw some beautiful, massive snow covered mountains off to the west. I couldn’t find a spot to pull off to take a picture and we were coming into town anyway so the opportunity was missed. It took me a few minutes to realize that we had been looking at Mt. McKinley in Denali National Park from over 80 miles away. It is quite rare to see it without clouds above it, but that is what we saw. Unfortunately, after our photo/shopping stop, the clouds had already begun to build and the view from north of Delta Junction was not nearly as good as from the south. Therefore, we have only the picture in our minds eye to share with you.

The local scenery was more of the same. There are mostly tree lined roads, occasional rivers and lakes, but much of this part of Alaska is pretty flat. We continued on to Fairbanks where we ran smack dab into civilization. The road suddenly split into a four lane divided highway with on and off ramps. It was a freeway! We took the off ramp from one freeway onto another and suddenly were completely through Fairbanks. We turned around after the freeway again ended and returned back into town and took a promising looking off ramp. We wandered around looking for a truck stop and large grocery store. We eventually found both. The food store was a Fred Meyers which looks and feels a lot like a Wal-Mart. They are pretty popular up here. The truck held $396 in fuel to fill it up. Mom, I think Fairbanks has changed since you were here.

We have been doing some planning and decided it was not practical to take the kids north toward the artic circle so we are going to go to Denali National Park and then out on the Kenai Peninsula with the time we have. We continued south to Denali and are parked at a commercial campground where we will stay for three days. Tomorrow will be a rest and recuperate day, and Thursday we will take the tour of Denali.

Pulling into the campground was even more of a show than usual. We first tried a campground 4 miles up the road that had large sites, but they had no wireless internet access. So we went to the place we are staying instead. The camp sites are not large, and we arrived quite late so most spots were already full and there were cars and trucks parked everywhere. It took some pretty fancy maneuvering to get the trailer backed in. Of course, we had half the campground watching and making bets on whether or not I could do it. Several came up to me afterwards and asked if I am a truck driver. They were really impressed.

Nana came down with a cold this morning so she is not feeling great. A quiet night and a day of rest will do us all good.
Posted by Richard at 3:22 PM